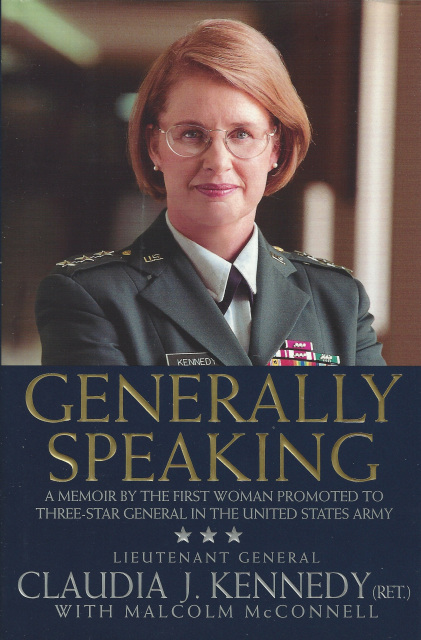 When Claudia J. Kennedy retired from the United States Army in June 2000, she had made history by becoming the Army's first woman three-star general. The highest-ranking female officer of her time, she was Deputy Chief of Staff for Intelligence, overseeing policy and resources affecting 45,000 soldiers worldwide. Her career had spanned thirty-two years, a time of monumental transformation for the Army. And even though her ideals of devotion to duty, honor, and courage were tested, Lieutenant General Kennedy and the institution she served came through with flying colors.

The daughter of an Army officer, Claudia was born into the Army. After a year of enlisted service while in college, she entered the Women's Army Corps as a second lieutenant and later became a military intelligence officer. Throughout her career, she would work within an institution that was evolving in its treatment of women, an institution that would make intense demands of her, yet one she would come to deeply love.

In GENERALLY SPEAKING, Lieutenant General Kennedy remembers her years as a young WAC turning less than golden administrative assignments into opportunities. She tells us how, just after the practice prohibiting women officers from commanding men was changed, she was placed in charge of a chaotic, drug-infested company in which an angry soldier threatened her life -- and shows us how she restored discipline and respect. And she brings to life the challenges she faced in South Korea when tensions were mounting along the DMZ and violence began to erupt.

As Lieutenant General Kennedy traces her rise to the rank of three-star general, GENERALLY SPEAKING offers an insider's view of how one of our most revered and misunderstood institutions operates, from the ways the Army corrects its mistakes and gets stronger to the details of an officer's daily life. And it reveals how a superlative leader makes decisions, handles crises, manages subordinates, and sticks to her guns... as it introduces us to a woman who both witnessed groundbreaking changes in the role of military women and helped make them.

In this book an inspiring and important story is told. Claudia Kennedy's strong belief in standing up for one's principles and earning one's stripes -- and stars -- makes her a stirring example for coming generations -- and a woman whose visionary contributions to America are not yet over.