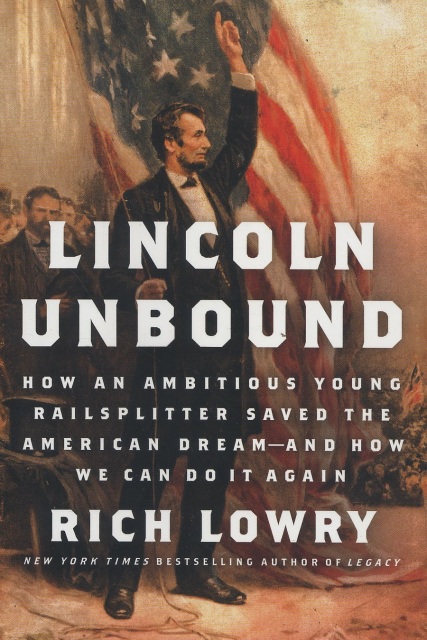 LINCOLN UNBOUND: HOW AN AMBITIOUS YOUNG RAILSPLITTER SAVED THE AMERICAN DREAM -- AND HOW WE CAN DO IT AGAIN by Rich Lowry

Lincoln Unbound: How an Ambitious Young Railsplitter Saved the American Dream -- and How We Can Do It Again by Rich Lowry

Revered today across the political spectrum, Abraham Lincoln believed in a small but active government in a nation defined by aspiration. Fired by an indomitable ambition from a young age, the man who would be immortalized as the "railsplitter" never wanted to earn his living with an ax. He educated himself in a frontier environment characterized by mind-numbing labor and then turned his back on that world. All his life he preached a gospel of work and discipline toward the all-important ends of self-improvement and individual advancement. As a Whig and then a Republican, he worked to smash the rural backwardness in which he was raised and the Southern plantation economy that depended on human bondage.

Both were unacceptably stultifying of human potential. In short, Lincoln lived the American Dream and succeeded in opening a way to it for others. He saw in the nation's founding documents the unchanging foundation of an endlessly dynamic society. He embraced the market and the amazing transportation and communications revolutions beginning to take hold. He helped give birth to the modern industrial economy that arose before the Civil War and took off after it.

His vision of an upwardly mobile society that rewards and supports individual striving was wondrously realized. Now it is under threat. Economic stagnation and social breakdown are undermining mobility and the American way.To meet these challenges, Rich Lowry draws us back to the lessons of Lincoln. It is imperative, he argues, to preserve a fluid economy and the bourgeois virtues that make it possible for individuals to thrive within it. THERE IS A BLACK "CLOSEOUT/REMAINDER" MARK ON THE BOTTOM PAGE EDGES.....