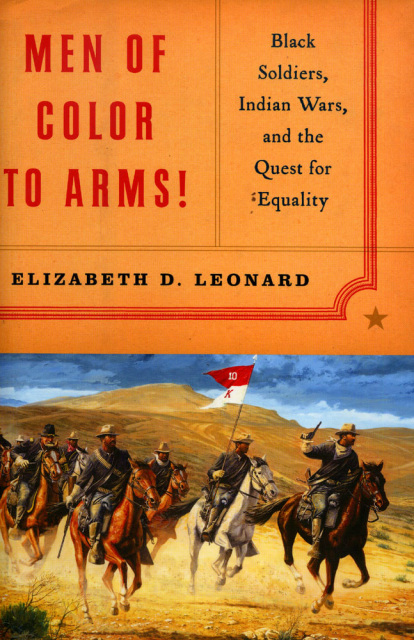 MEN OF COLOR TO ARMS! by Elizabeth D. Leonard

Men of Color to Arms! by Elizabeth D. Leonard

In 1863, at the height of the Civil War, Frederick Douglass promised African Americans that serving in the military offered a sure path to freedom. Once a black man became a soldier, Douglass declared, "there is no power on earth or under the earth which can deny that he has earned the right to citizenship in the United States." More than 180,000 black men heeded his call to defend the Union -- only to find that the path to equality would not be so straightforward.

In this sharply drawn history, Professor Elizabeth D. Leonard reveals the aspirations and achievements as well as the setbacks and disappointments of African American soldiers. Drawing on eye-opening firsthand accounts, she restores black soldiers to their place in the arc of American history, from the Civil War and its promise of freedom until the dawn of the twentieth century and the full retrenchment of Jim Crow.

Along the way, Leonard offers a nuanced account of black soldiers' involvement in the Indian wars, their attempts to desegregate West Point and gain proper recognition for their service, and their experience of Reconstruction, as blacks worked to secure their place in an ever-changing nation. With abundant primary research, enlivened by memorable characters and vivid descriptions of army life, MEN OF COLOR TO ARMS! is an illuminating portrait of a group of men whose contributions to American history need to be further recognized.