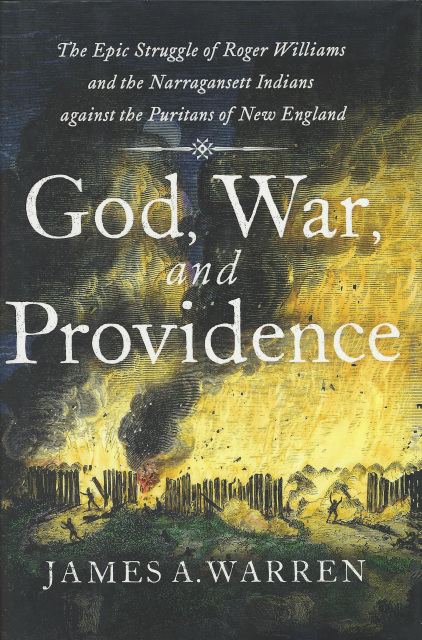 GOD, WAR, AND PROVIDENCE: THE EPIC STRUGGLE OF ROGER WILLIAMS AND THE NARRAGANSETT INDIANS AGAINST THE PURITANS OF NEW ENGLAND by James A. Warren

God, War, and Providence: The Epic Struggle of Roger Williams and the Narragansett Indians against the Puritans of New England by James A. Warren

GOD, WAR, AND PROVIDENCE tells the epic story of resistance to Puritan domination in Rhode Island, the heretic colony that was home to the Narragansetts, seventeenth-century New England's most powerful Indian tribe, and to Roger Williams, America's leading advocate of religious freedom. Dramatically banished from the Massachusetts Bay Colony in 1635, Williams purchased land from the Narragansetts and founded the town of Providence, Rhode Island, as a place where Indian and English cultures could flourish side-by-side, in peace. The Puritans, however, wanted to control Providence and achieve mastery over the Narragansetts. Williams and the Narragansetts waged a grueling forty-year resistance campaign against Puritan subjugation. Despite constant harassment, the tribe steadfastly refused to buckle under to the authority of the Puritan political confederation. After two military operations against the tribe sputtered into failure, an army of a thousand Puritan soldiers launched a ferocious attack on the tribe's remote fort in December 1675. The Great Swamp Fight drew the Narragansetts into the tragic and immensely destructive conflict known as King Philip's War, the event that historian Jill Lepore describes as the "defining moment, when any lingering, though slight, possibility for [Indian] political and cultural autonomy was lost." In GOD, WAR, AND PROVIDENCE, James A. Warren explores in detail the remarkable alliance between Roger Williams and the Narragansett Indians, explaining how they joined forces to defend the autonomy and their distinctive ways of life against Puritan encroachment. Deeply researched and vividly written, this spellbinding account of the Narragansetts' courageous resistance campaign serves as a telling precedent for white-Native American encounters along the North American frontier for the next 250 years.