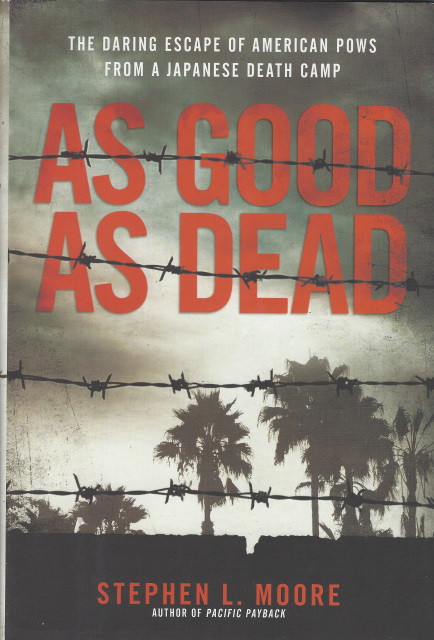 AS GOOD AS DEAD: THE DARING ESCAPE OF AMERICAN POWS FROM A JAPANESE DEATH CAMP by Stephen L. Moore

As Good As Dead: The Daring Escape of American POWs from a Japanese Death Camp by Stephen L. Moore

In late 1944, the Allies invaded the Japanese held Philippines, and soon the end of the Pacific War was within reach. But for the last 150 American prisoners of war still held on the island of Palawan, there would be no salvation. After years of slave labor, starvation, disease, and torture, their worst fears were about to be realized. ON December 14, with machine guns trained on them, they were herded underground into shallow air-raid shelters -- death pits dug with their own hands.

Japanese soldiers doused the shelters with gasoline and set them on fire. Some thirty prisoners managed to bolt from the fiery carnage, running a lethal gauntlet of machine-gun fire and bayonets to jump from the cliffs to the rocky Palawan coast. By the next morning, only eleven men were left alive -- but their desperate journey to freedom had just begun.

As Good as Dead is one of the greatest escape stories of World War II, and one that few Americans know. The eleven survivors of the Palawan Massacre -- some badly wounded and burned -- spent weeks evading Japanese patrols. They scrounged for food and water, swam shark-infested bays, and wandered through treacherous jungle terrain, hoping to find friendly Filipino guerrillas. Their endurance, determination, and courage in the face of death make this a gripping and inspiring saga of survival.