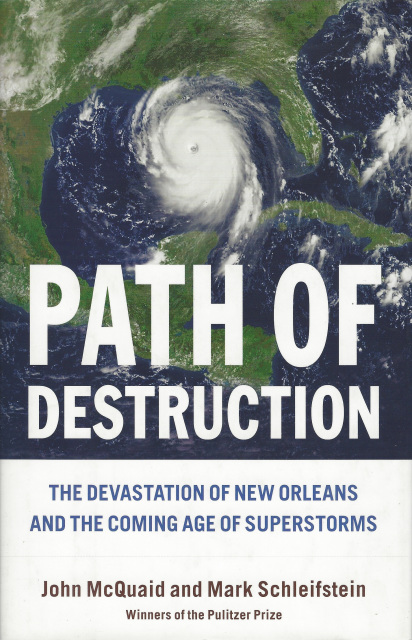 On August 29, 2005, near the peak of a busy storm season, Hurricane Katrina rose up out of the roiling Gulf of Mexico and barreled into southeastern Louisiana with astonishing fury. Within moments, rising water overwhelmed the shoddily designed levees and poured into New Orleans, killing a thousand people, destroying billions of dollars' worth of property, and stranding tens of thousands. Scenes we expect to see only in far-off countries took place in our own backyard: a gumbo of human waste from sewage plants and gasoline from flooded cars; corpses sloshing through the streets; a storied city reduced to a ghost town. And back at the White House and in the corridors of FEMA, a disaster of a different sort was unfolding.

Now, one year later, award-winning journalists John McQuaid and Mark Schleifstein give us the most comprehensive account of how and why Katrina happened. But PATH OF DESTRUCTION isn't just a book about the hurricane, those who survived, and those who didn't; it's also an account of the dreadful inadequacies and warning signs that existed prior to 2005, an indictment of the officials who failed to act, and a scientific investigation into why these superstorms are coming now -- and why even more may be on the way. Drawing upon historical records, cutting-edge geology, and the latest climatology studies, McQuaid and Schleifstein reveal how changes in the earth's atmosphere, and the choices made by people and politicians, have created conditions that suggest the destruction of New Orleans and the Gulf may be only the beginning.

Combining exclusive firsthand accounts of the storm and its aftermath with the latest science, PATH OF DESTRUCTION is a brilliant investigation into who was left behind, what's to come, and why. For anyone who has tried to understand what happened in New Orleans and what is on the horizon, John McQuaid and Mark Schleifstein's book is essential reading.

THIS IS A BRAND NEW BOOK.THERE IS A BLACK "CLOSEOUT/REMAINDER" MARK ON THE TOP PAGE EDGES.....