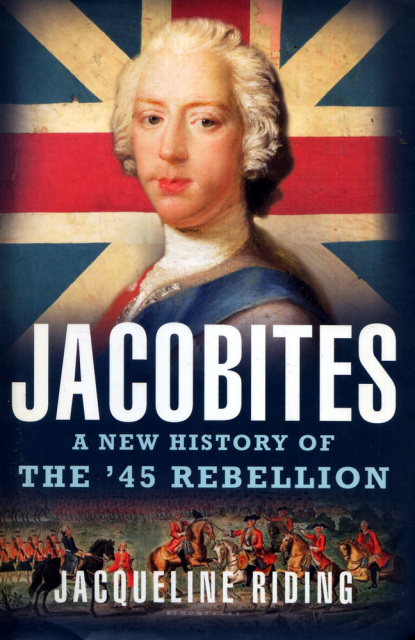 JACKOBITES: A NEW HISTORY OF THE '45 REBELLION by Jacqueline Riding

Jacobites: A New History of the '45 Rebellion by Jacqueline Riding

The Jacobite Rebellion of 1745-46 is one of the most important turning points in British history -- in terms of national crisis every bit the equal of 1066 and 1940. The tale of Charles Edward Stuart, "Bonnie Prince Charlie," and his heroic attempt to regain his grandfather's (James II) crown remains the stuff of legend: the hunted fugitive, Flora MacDonald, and the dramatic escape of the sea to the Isle of Skye. But the full story -- the real history -- is even more dramatic, captivating and revelatory.

Much more than a single rebellion, the events of 1745 were part of an ongoing civil war that threatened to destabilize the British nation and its empire. The Bonnie Prince and his army alone, which included a large contingent of Scottish Highlanders, could not have posed a great threat. But with the involvement of Britain's perennial enemy, Catholic France, it was a far more dangerous and potentially catastrophic situation for the British crown. With encouragement and support from Louis XV, Charles's triumphant Jacobite army advanced all the way to Derby, a mere 120 miles from London, before a series of missteps ultimately doomed the rebellion to crushing defeat and annihilation at Culloden in April 1746 -- the last battle ever fought on British soil.

Jacqueline Riding conveys the full weight of these monumental years of English and Scottish history as the future course of Great Britain as a united nation was irreversibly altered.