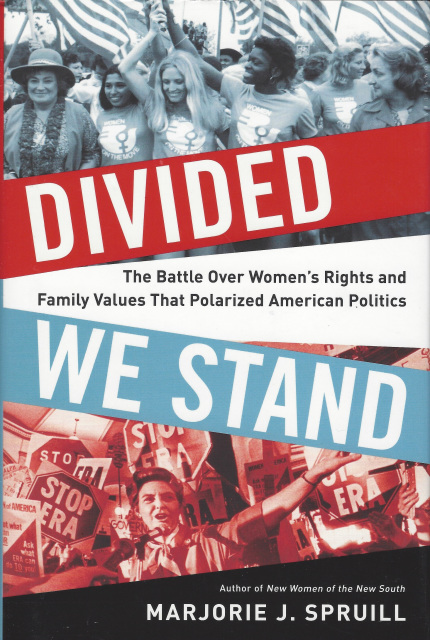 DIVIDED WE STAND: THE BATTLE OVER WOMEN'S RIGHTS AND FAMILY VALUES THAT POLARIZED AMERICAN POLITICS by Marjorie J. Spruill

Divided We Stand: The Battle Over Women's Rights and Family Values that Polarized American Politics by Marjorie J. Spruill

Gloria Steinem was quoted in 2015 (In the New Yorker) as saying the National Women's Conference in 1977 "may take the prize as the most important event nobody knows about." After the United Nations established International Women's Year (IWY) in 1975, Congress mandated and funded state conferences to elect delegates to attend the National Women's Conference in Houston in 1977, where Bella Abzug, Gloria Steinem, and other feminists endorsed a platform supporting abortion rights, the Equal Rights Amendment, and gay rights. Across town, Phyllis Schlafly, Lottie Beth Hobbs, and the conservative women's movement held a massive rally to protest federally funded feminism and launch a pro-family movement.

Divided We Stand explores the role social issues have played in politics by reprising the battle between feminists and their conservative challengers, leading to Democrats supporting women's rights and Republicans casting themselves as the party of family values. As the 2016 presidential election made clear, the women's rights movement and the conservative women's movement have irrevocably affected the course of modern American politics. We cannot fully understand the present without appreciating the pivotal events that transpired in Houston and immediately thereafter.