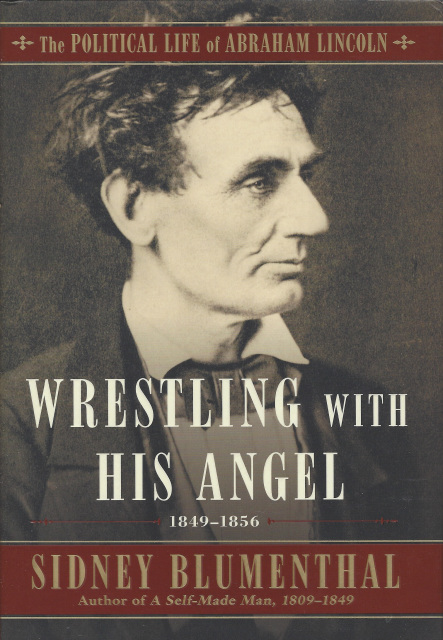 In 1849, Abraham Lincoln seems condemned to poilical isolation and defeat. His Whig Party is brokn in the 1852 election and disintegrates. His perennial rival, Stephen Douglas forges an alliance with the southern senators and Secretary of War Jefferson Davis. Violent struggle breaks out on the plains of Kansas, a prelude to the Civil War.

Lincoln rises to the occasion. Only he can take on Douglas in Illinois, and he finally delivers the dramatic speech that leaves observers stunned. In 1855, he makes a race for the Senate, which he loses when he throws his support to a rival to prevent the election of a pro-slavery candidate. Now, in Wrestling with His Angel, Sidney Blumenthal explains how Lincoln and his friends operate behind the scenes to destroy the anti-immigrant party in Illinois and clear the way for a new Republican Party. Lincoln takes command. He writes its first platform and vaults onto the national stage as the leader of a party that will launch him to the presidency.

In Wrestling with His Angel, Lincoln emerges from the wilderness to the peak of his career as he takes control of the nation's most profound spiritual crisis -- slavery -- and enters the battle for the nation's soul.