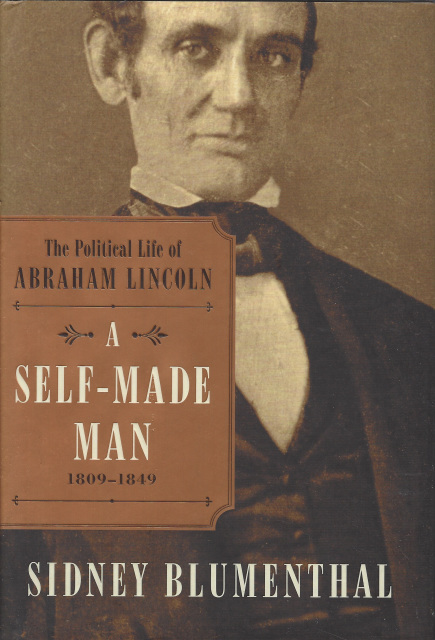 A SELF-MADE MAN, 1809 - 1849: THE POLITICAL LIFE OF ABRAHAM LINCOLN by Sidney Blumenthal

A Self-Made Man, 1809 - 1849: The Political Life of Abraham Lincoln by Sidney Blumenthal

A Self-Made Man begins with Linncoln's painful childhood, a time he remembered as his father's slave, and describes his determined emergence as the man we recognize as Abraham Lincoln.

Lincoln's early years, among antislavery Baptists in backwoods Kentucky and Indiana, planted the roots of his repudiation of slavery and pro-slavery theology. Lincoln became a freethinker, absorbing Thomas Paine as wll as Shakespeare and the Bible. The young man held political aspirations from his earliest years, focusing on Stephen A. Douglas, his political rival, whom he would battle for decades. Elected to Congress, Lincoln opposed the Mexican War; supported the Wilmot Proviso, which banned slavery in territories taken from Mexico; and engaged enthusiastically in partisan politics that led to the Civil War. He was thrust into the political wilderness after one term and came to understand what was at stake for the nation in the crisis of slavery.

Sidney Blumenthal describes Lincoln as an awkward suitor. His marriage to the upper-class Mary Todd was important to his social standing and rising political career. Mary was an asset to her husband, a rare woman of her day who had strong political opinions. She saw Lincoln's raw potential and married him over her family's objections.

Blumenthal's vivid account of Lincoln's early years is based on prodigious research. It places Lincoln squarely in the politics of this tumultuous period.