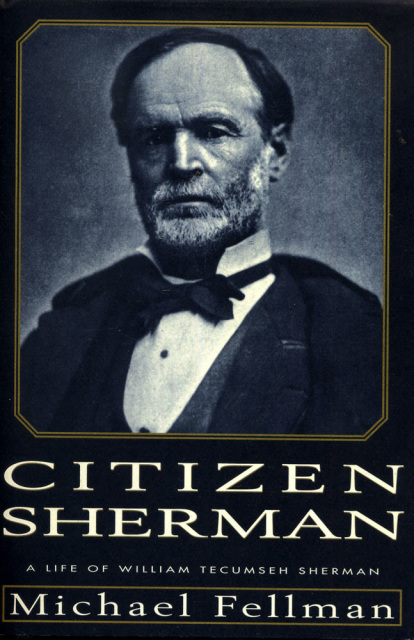 Only a blood-drenched civil war resolved the inescapable issue of slavery in nineteenth-century America. When politicians failed, it was those few Union military men who were sufficiently ferocious and calculating who carried on to unconditional victory. Of all the warriors thus engaged, William Tecumseh Sherman went the furthest; it was he who both articulated and practiced a formidable scorched-earth policy. More than any other Union general, Sherman was capable of conducting mass psychological warfare in order to break the heart of the Confederacy. Sherman succeeded in large measure because he could plumb and enact his own rage with ruthless clarity. The inner nature of Sherman's genius for destruction forms the center of Citizen Sherman.

But this biography is much broader than an analysis of war from Sherman's perspective, for Michael Fellman seeks to illuminate the emotional as well as the intellectual, ideological, and occupational lives of this extraordinary, but at the same time representative, American Victorian man. Sherman was never guarded; in fact he would blurt out his most private opinions and feelings to all who might listen, notably his wife, Ellen Ewing Sherman, with whom he suffered through a tension-filled and angry thirty-eight-year-long marriage. Sherman vented his anger, his passion -- his need to both love and hate -- not only at his wife but at his children, his friends and enemies, and his lovers. He was a self-lacerating failure before and during the opening stages of the war, a soaring destroyer later in the conflict, and a vitriolic feudist with other generals after the war, when he traveled restlessly across the land to maintain contact with his "boys," the veterans of brutal marches through Georgia to the sea and up through the Carolinas. He was incapable of the Machiavellian finesse necessary to post-war political life, though he had followed his own insubordinate political program during the war, especially in his overtly racist refusal to bring black troops into his army. His racism extended to Jews and Mexicans, and to Indians, against whom he led a ruthless post-Civil War campaign in order to clear the Great Plains for the railroad and white settlement.

It was men like Sherman, statesmen of the sword, who beat the Confederacy and destroyed the Indian nations, and Michael Fellman examines, with both detachment and compassion, how such men equipped themselves to secure American nationalism. His is a study of the construction of the moral meanings of warfare, of masculinity, family, friendships, and "hateships," of extra-marital love and of codes of honor, of a long and varied career, of a great public icon. His William Tecumseh Sherman is bewilderingly human, frighteningly destructive, and finally heroic, a man who encapsulates both the best and the worst aspects of the epoch of conquest that guaranteed the United States for later generations.