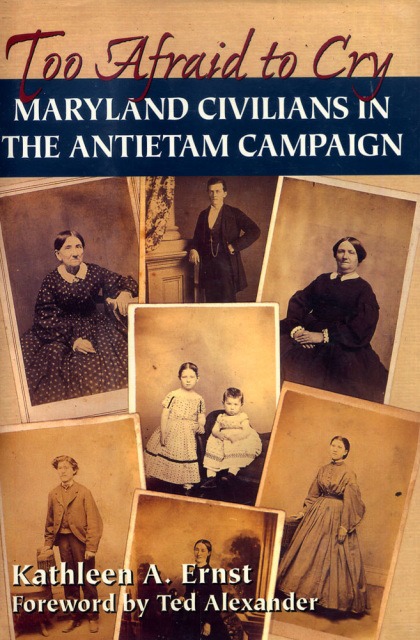 Historians identify the battle of Antietam (Sharpsburg), which unfolded on September 17, 1862, as "the bloodiest day in American history." By best counts, more than 23,000 men were dead, wounded or missing by nightfall. And left in the smoldering aftermath were the children, women, and men who made their homes in the village of Sharpsburg and on surrounding farms.

The military conflict that took place in the hills of western Maryland is a critical chapter in American history. But Civil War history is more than a schematic of armies and tactics. Considering the impact the Civil War had on Maryland, and conversely, Maryland had on the politics of both North and South, surprisingly little has been written about this divided state and her citizens. Too Afraid to Cry weaves together firsthand accounts and fast-paced narrative into a tapestry that accurately portrays the experiences of Unionist and secessionist citizens throughout the 1862 Maryland campaign.

In this crucible of western Maryland, the lines between soldier and civilian, friend and enemy, blurred as they never had before. Families and friendships were ripped apart by politics. Those who wanted only to be left alone were forced to face the reality of war on their very thresholds. Some fled immediately, scraping together what they could as refugees; those who remained often were rewarded with shattered businesses and homes.

The soldiers who participated in the 1862 campaign did so because they had chosen to march to war. The Maryland inhabitants who met them had not made that choice. Some rose to the challenge and demonstrated remarkable courage; others exhibited extraordinary foolishness or greed. Whatever their experiences may have been, their stories -- told for the first time in Too Afraid to Cry -- are no less important than those of the soldiers who marched through their cornfields, and are essential to a full understanding of the Civil War.