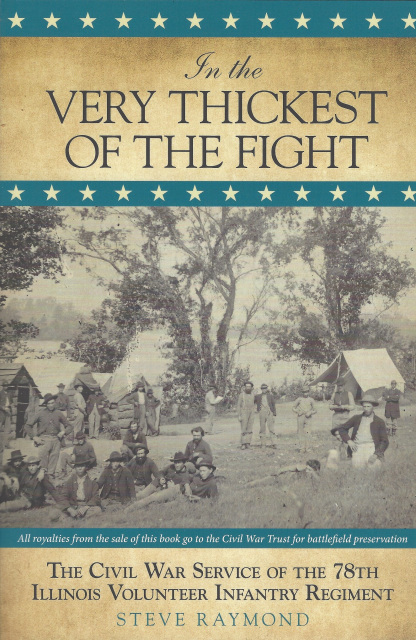 IN THE VERY THICKEST OF THE FIGHT: THE CIVIL WAR SERVICE OF THE 78TH ILLINOIS VOLUNTEER INFANTRY REGIMENT by Steve Raymond

In the Very Thickest of the Fight: The Civil War Service of the 78th Illinois Volunteer Infantry Regiment by Steve Raymond

The 78th Illinois Volunteer Infantry Regiment took the field under command of a lacadaisical colonel who was frequently absent and feuded with his own officers and superiors. Distrusted by senior officers, the 78th became a regiment that was always left behind -- until its own officers forced their reluctant colonel to resign. His replacement was a forceful leader who turned the regiment into a crack fighting outfit that performed heroically in the battle of Chickamauga and man of the great battles of the Atlanta campaign. It later joined Sherman's March to the Sea and fought its way out of the tangle swamps of Bentonville in one of the war's last battles.

Its story is told here mostly in the words of its soldiers through letters, diaries, and other sources, many never before accessed by historians. This book sheds ne light on many important incidents and battles in the Civil War's Western Theater.