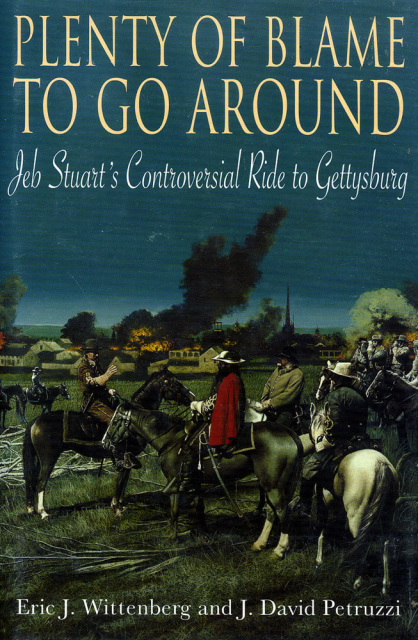 June 1863. The Gettysburg Campaign is in its opening hours. Harnesses jingle and hooves pound as Confederate cavalryman James Ewell Brown (JEB) Stuart leads three brigades of veteran troopers on a ride that triggers one of the Civil War's most bitter and enduring controversies.

Instead of finding glory and victory -- two objectives with which he was intimately familiar -- Stuart reaped stinging criticism and substantial blame for one of the Confederacy's most stunning and unexpected battlefield defeats. In Plenty of Blame to Go Around, Eric J. Wittenberg and J. David Petruzzi objectively investigate the role Stuart's horsemen played in the disastrous campaign. It is the most comprehensive and thoughtful book ever written on this important and endlessly fascinating subject.

Stuart left Virginia acting on General Robert E. Lee's discretionary orders to advance into Maryland and Pennsylvania, where he was to screen Lt. Gen. Richard Ewell's marching infantry corps and report on enemy activity. The mission quickly jumped off its tracks when one unexpected event after another unfolded across Stuart's path. For days, neither Lee nor Stuart had any idea where the other was, and the enemy blocked the horseman's direct route to the Confederate army, which was advancing into Pennsylvania nearly blind. After fighting several significant actions, Stuart reached Lee on the afternoon of July 2. By that time, the major armies had collided at Gettysburg and the second day's fighting was underway. And one of the campaign's greatest controversies was born.

What really happened on Stuart's ride? What viable options did he have? Were his choices wise? Did he disobey Lee's orders by stripping the army of its "eyes and ears?" Was Stuart to blame for the unexpected combat that broke out at Gettysburg? Wittenberg and Petruzzi, widely recognized for their study and expertise of Civil War cavalry operations, draw upon a massive array of primary sources, many previously unpublished, to explore fully Stuart's ride, its consequences, and the intense debate that followed and continues to this day.