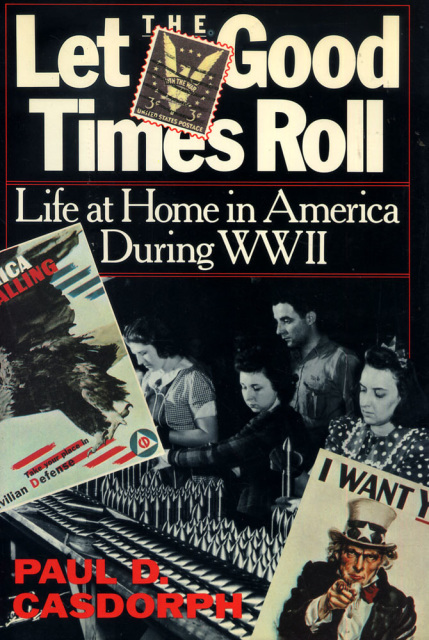 Pearl Harbor threw America into the turmoil of war, but the rush to arms was only part of the fervor that seized the country in December of 1941. Coming on the heels of the Depression, the war signalled the dawn of an era of rapid social and cultural upheaval that left the United States changed forever. Chronicling the shifts in styles, moods, tastes, emotions, and opinions -- from the hysteria that followed Pearl Harbor to the jubilation of VJ day -- Paul Casdorph offers a vastly entertaining look at life on the American home front during World War II.

For civilians the war meant full employment, economic plenty, and a touch of moral abandon. Women and blacks were courted for jobs. "Rosie the Riveter" transformed the image of women in the workplace, and blacks rioted in Detroit and other cities, seeking to end discriminatory practices in civilian and military life. There were ration coupons and shortages and a black market, but there was also Frank Sinatra and Glenn Miller topping the Hit Parade, and booming movie attendance as record crowds flocked to see stars Betty Grable, Humphrey Bogart, and Jimmy Cagney in movie classics like Casablanca and Yankee Doodle Dandy. Bobby sox and push-up bras were worn, Victory Gardens were being planted, and marriages performed in record numbers.

Let the Good Times Roll captures the hurly-burly of the forty-five heady months that were America's involvement in the war. It emphasizes the activities of the business and political community and the day-to-day amusements and achievements of both common people and celebrities. This book is indispensable reading for anyone interested in, or who wants to relive this unique period of American history.