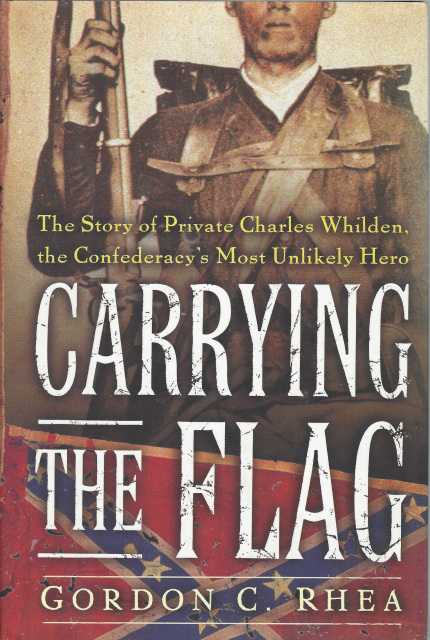 CARRYING THE FLAG: THE STORY OF PRIVATE CHARLES WHILDEN, THE CONFEDERACY'S MOST UNLIKELY HERO by Gordon C. Rhea

Carrying the Flag: The Story of Private Charles Whilden, the Confederacy's Most Unlikely Hero by Gordon C. Rhea

For forty years, Charles Whilden lived a life most noteworthy for a series of near misses. Born to a prominent South Carolina family that had fallen on hard times, he tried his hand at a number of doomed ventures, from practicing law to copper speculation, from Detroit to Santa Fe. Repeatedly turned down for service in the Confederate Army, he did not enlist until the desperate days when anyone capable of locomotion was brought on to fill the ranks. He was subsequently plunged into the very regiment destined to see the worst of Grant's brutal spring 1864 campaign. But in the little time allotted to him, and thanks to a remarkable chain of events, Whilden would go on to discover a courage within that nothing in his former endeavors suggested he possessed -- and change the course of one of the Civil War's most significant battles. Against the epic backdrop of the antebellum South, Grant and Lee's strategic maneuvering, and some of the bloodiest fighting this country has seen, acclaimed historian Gordon C. Rhea brings us this incredible story of courage and endurance, terror and heroism.

Prodigiously researched and richly detailed, Carrying the Flag is both a gripping battle story and a panoramic view of history at a critical crossroads, one that takes us beyond the frontlines, and shows us how individual decisions can resonate in unforeseen and dramatic ways.