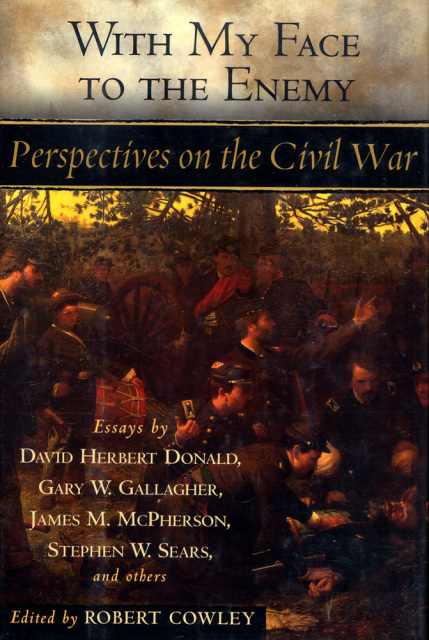 WITH MY FACE TO THE ENEMY: PERSPECTIVES ON THE CIVIL WAR, Edited by Robert Cowley

With My Face to the Enemy: Perspectives on the Civil War, Edited by Robert Cowley

The lawyer-historian Alan T. Nolan called the Civil War our "folk epic told over and over again." Robert Cowley reminds us in his excellent introduction to this volume that it was the Civil War that "finally brought us together as a nation, made us truly a 'union.'" WITH MY FACE TO THE ENEMY is one of the most provocative and wide-ranging anthologies on the subject to come along in years, and a collection everyone interested in American history will want to read. Its thirty-six illuminating essays examine the war from the perspectives critical to its outcome -- the larger-than-life personalities of the important players from Lincoln to Lee and the national strategies and key battle tactics that shaped the four-year-long struggle. Contributors include the leading lights of Civil War scholarship: James M. McPherson, Stephen W. Sears, Gary W. Gallagher, David Herbert Donald, and seventeen others.

James M. McPherson's essays ponder three diverse, fascinating subjects: Abraham Lincoln's use of language and its role in his victory; Jefferson Davis and Robert E. Lee's failed southern strategies; and Ulysses S. Grant's race with death to complete the memoirs that are his most enduring monument. Stephen W. Sears, in four essays, describes the daring flanking maneuvers of Stonewall Jackson at Chancellorsville and presents the last word on Lee's legendary "lost order" among other topics. Other highlights include David Herbert Donald on how Lincoln took charge in the early days of his presidency; Gary W. Gallagher on Lee's record before his ascension as a southern icon; John Bowers on Stonewall Jackson and George H. Thomas, "The Rock of Chickamauga"; Noah Andre Trudeau on trench warfare in Virginia; and Thomas Fleming on a divided West Point.