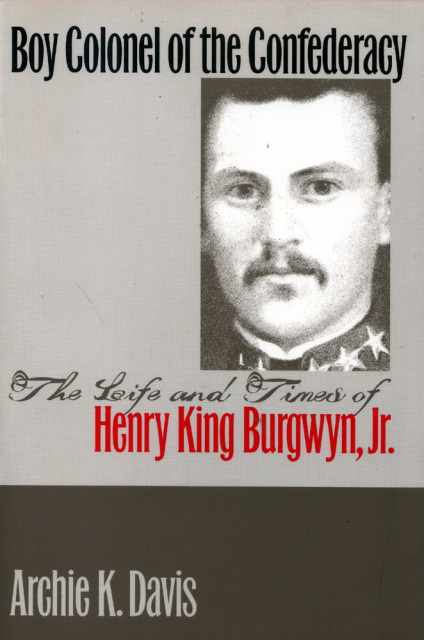 BOY COLONEL OF THE CONFEDERACY: THE LIFE AND TIMES OF HENRY KING BURGWYN, JR. by Archie K. Davis

Boy Colonel of the Confederacy: The Life and Times of Henry King Burgwyn, Jr. by Archie K. Davis

Henry King Burgwyn, Jr. (1841 - 63), one of the youngest colonels in the Confederate Army, died at the age of twenty-one while leading the Twenty-sixth North Carolina regiment into action at the battle of Gettysburg. In this sensitive biography, Archie Davis recounts the brief life of a talented young man whose maturity, courage, and strength of character belied his years.

Although influenced by family loyalties to both the North and the South, Burgwyn remained an ardent Southern patriot at the outbreak of the Civil War. Commissioned a captain after graduating from the Virginia Military Institute, he quickly rose through the ranks to become colonel of the Twenty-sixth North Carolina regiment. On the first day of the battle of Gettysburg, Burgwyn was fatally wounded while leading an attack on Brigadier General Solomon Meredith's famed "Iron Brigade."

Drawing on Burgwyn's own letters and diary, Davis provides a revealing portrait of the young man's character and a striking example of a soldier who selflessly fulfilled his duty. He also captures the flavor of the times in describing North Carolina society during the antebellum period and the Civil War.