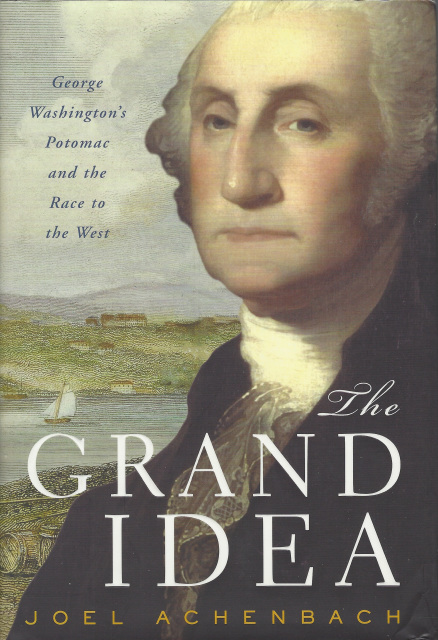 The war had been won. Now what? This was the pressing political question for the United States in 1784, and a consuming one for George Washington. He had laid down his sword and returned home to Mount Vernon after eight and a half years as commander of the Continental Army. He vowed that he had retired forever, that he would be a farmer on the bank of the Potomac River, under his own "vine and fig tree." But history was not done with him, and he was not done with history.

Within a year, as Joel Achenbach relates in this stunning narrative, Washington saddled up and rode away on one of the most daring journeys of his rich and adventurous life: a trek across the Appalachian mountains to the frontier, wher he would inspect his long-neglected western property and try to collect rent.

The Grand Idea is the story of Washington's ambitions for the brand-new republic that he had fought so hard to create. His western journey culminates in a breathtaking scheme: Washington, with the help of Thomas Jefferson, will transform the Potomac River into a commercial artery that will link the new West to the old East. Worried that the newborn country was so fragmented that it might literally split into two separate and rival nations, he uses the skills he learned as a young backwoods surveyor to come up with his river plan. The future of the Union, Washington believes, depends on the Potomac route to the West, which will bind the country to one enterprise.

Achenbach's sympathetic and wry portrait of General Washington is not the stiff figure of official portraits, but that of a bold man who plunges into uncharted forest and sleeps in a downpour with only his cloak for shelter. He is an inventor, entrepreneur, and land speculator. He loves the West. This Washington is someone who understands that the fledgling republic clingint to the Atlantic seaboard will become a great and booming nation.

Achenback tracks Washington's river plan from the choosing of the site for the national capital, which led to his being elected as the first president, to its link, decades after his death, to various grandiose plans for a canal that would run hundreds of miles. Ultimately the dream of a Potomac route to the West is abandoned. The nation splits not East and West but North and South, and the river becomes a boundary between warring sides in the Civil War.

Like such classics as Undaunted Courage and Founding Brothers, Achenbach's The Grand Idea is a large narrative of a great man and his grand plan that captures the uncertainties and conflicts of the new country, the passions of an ambitious people, and the seemingly endless beauty of the American landscape.

THIS IS A SIGNED FIRST EDITION. IT IS A USED BOOK IN FINE CONDITION.