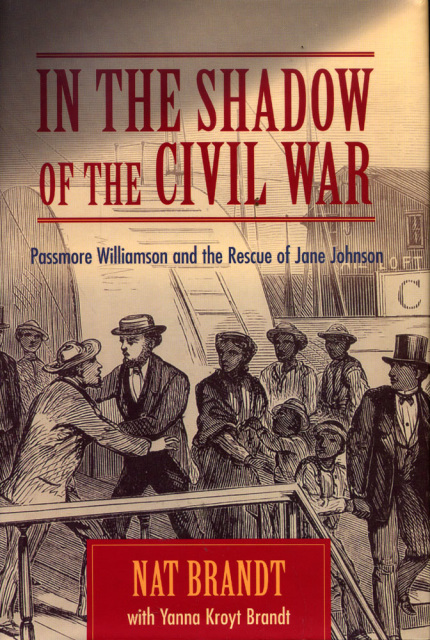 IN THE SHADOW OF THE CIVIL WAR: PASSMORE WILLIAMSON AND THE RESCUE OF JANE JOHNSON by Nat Brandt

In the Shadow of the Civil War: Passmore Williamson and the Rescue of Jane Johnson by Nat Brandt

Six years before the onset of the Civil War, two courageous figures -- one a free white man and one an enslaved black woman -- risked personal liberty to ensure each other's freedom in an explosive episode that captured the attention of a nation on the brink of cataclysmic change. In this deeply researched account of the rescue of the slave Jane Johnson by the Philadelphia Quaker and fervent abolitionist Passmore Williamson, of the federal court case that followed, and of Johnson's selfless efforts to free the jailed Williamson, veteran journalist Nat Brandt and Emmy-winning filmmaker Yanna Kroyt Brandt capture the heroism and humanity at the heart of this important moment in American history.

In July 1855, Williamson and his colleague William Still responded to a written plea from Johnson and rushed to the Camden ferry dock to liberate her and her two children from their master in a daring confrontation. The abolitionists had no idea that Johnson's owner, Col. John Hill Wheeler, was connected to the highest levels of government and was a personal friend of President Franklin Pierce. As a result Wheeler was able to have Williamson arrested and confined to Moyamensing Prison, an institution notorious for harboring Philadelphia's worst criminals.

The case and Williamson's imprisonment became an international cause celebre with famous leaders of the abolitionist movement, black and white, visiting the prisoner. In one of the episode's most dramatic moments, Johnson returned to Philadelphia, at the risk of her own freedom, to testify on Williamson's behalf. There were petitions in many states to impeach Judge John Kintzing Kane, who stubbornly refused to release Williamson.

Williamson's martyrdom spotlighted Philadelphia as one northern city where the growing rifts involving states' rights, federal mandates, and personal liberties had come to the fore. His case put a vivid, human face on the issue of slavery, helped to strengthen the will of its opponents, and highlighted the increasing inevitability of the Civil War.

Encompassing acts of brazen defiance, heroic self-sacrifice, high courtroom drama, and the rise of a cult of celebrity, the Brandts' brisk narrative takes readers into the lives of the central participants in this complex episode. Enhanced by eleven illustrations, In the Shadow of the Civil War chronicles events that presage the divisive national conflict that followed and that underscore the passionate views on freedom and justice that continue to define the American experience in our own time.