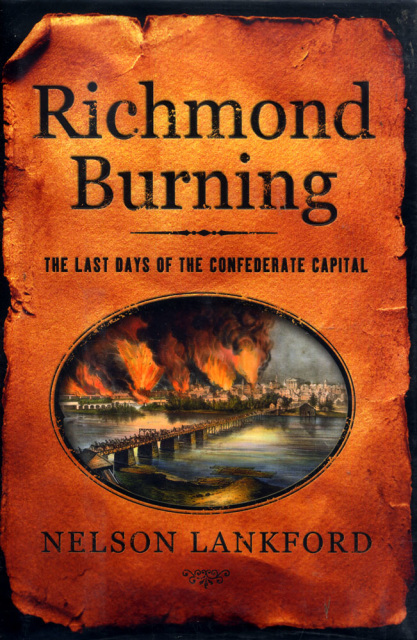 RICHMOND BURNING: THE LAST DAYS OF THE CONFEDERATE CAPITAL by Nelson Lankford

Richmond Burning: The Last Days of the Confederate Capital by Nelson Lankford

Through the winter and early spring of 1865, while Union armies ranged at will across the South, Richmond still glittered with the hard defiance of a city long at war. But this last flicker of resolve only made the city's fall all the more devastating. By the morning of April 2, Gen. Robert E. Lee's command had been corroded by desertion, and the forces of his opponent were growing daily. Lee could no longer hold the line of forts and trenches that guarded the Confederate capital. To save his army, he had to retreat. To avoid capture, the government needed to abandon the city that night. Faced with the inevitability of Grant's triumph, Jefferson Davis and his cabinet fled, leaving Richmond to its fate -- looting, fire, capture, and the end of hope for a southern nation.

As the last southern soldiers left at dawn on Monday, they fired tobacco warehouses and all the bridges across the James river. A rising wind spread embers of destruction over the rooftops. When the Union army marched in, it found the city ablaze. To an eyewitness, the sun shone through the thickening smoke "like a great beacon of woe, or the awful unlashed eye of an avenging Deity."

For staunch Confederates, for local Unionists who opposed them, and for the liberated slaves, the city's fall turned the world upside down. In their grief and despair, and their stubborn, sometimes violent resistance to reunification, the vanquished Confederates could not have known that the conquest of Richmond heralded the birth of the modern United States of America.

In this enthralling, meticulously researched book, Nelson Lankford draws upon a treasure trove of diaries, letters, memoirs, and newspaper reports to create a narrative of novelistic immediacy that relives the experiences of the men and women, both black and white, who witnessed these tumultuous events that convulsed their city. Here are unforgettable scenes of Abraham Lincoln's voyage up the James River to the Confederate White House, and of Robert E. Lee's return to Richmond to survey the still-smoldering ruins. Richmond Burning is at once a superb work of history and a stunning piece of dramatic prose.