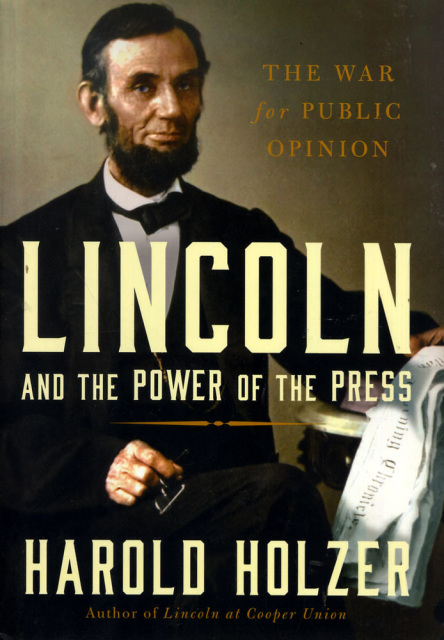 LINCOLN AND THE POWER OF THE PRESS: THE WAR FOR PUBLIC OPINION by Harold Holzer

Lincoln and the Power of the Press: The War for Public Opinion by Harold Holzer

Harold Holzer, the leading Lincoln scholar today, offers a work of extraordinary drama and scholarship as he examines Lincoln's relationships with the press -- both as a reader and a master of its potential to persuade and manage. Holzer has found an entirely new way to understand Lincoln as he employed the nation's newspapers, managed their owners, and used their growing power to steer the huge issues of his day -- slavery, union, war, as well as his own political career.

But, as the nation was tearing itself apart, Lincoln authorized the most widespread censorship in the nation's history, closing down papers that were "disloyal," even jailing or exiling editors who opposed enlistment or sympathized with secession. The official telegraph, the new invention that made possible instant reporting from the battlefield, was moved to the office of the secretary of war to deny access to newsmen.

Holzer's fresh and arresting portrait of this activist politician and president is reflected by the ambitious journalists who covered him, supported him, and assailed him from his early career through to the night of his assassination -- when one reporter ran to the box where Lincoln was shot and emerged to write the story with the sight of Lincoln's blood still fresh in his memory.

Lincoln and the Power of the Press is a major contribution that helps us understand Lincoln's unparalleled perception and shrewdness as well as the dawn of the Age of Journalism and the power the media would acquire and use.