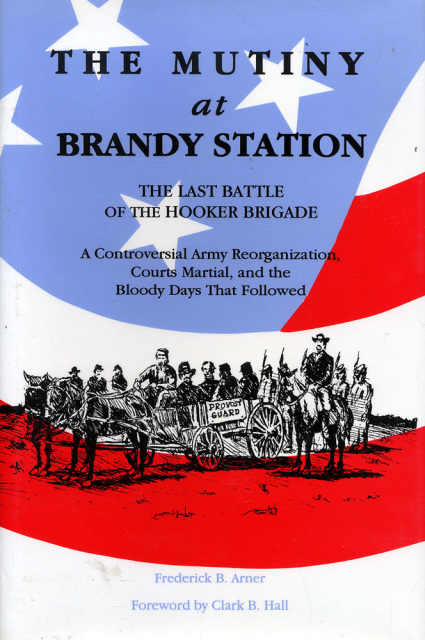 The Mutiny at Brandy Station presents in microcosm the character and actions of men who served in the United States Army of the Potomac in 1864, when some of the veteran regiments were transferred from units they had served with pride and placed under commanders whose competence and bravery they questioned.

This story honors some officers of truly h eroic proportion who believed in their own invulnerability to such a degree as to be detrimental to their physical well-being, and reveals the petty, vindictive posturing and in-fighting of promotion politics among some others. It presents veteran enlistees who served with honor for three long years, sweated out their final days as honorably as possible, and wrestled with the question of re-enlisting under new officers.

The setting is Brandy Station, Virginia, ten months after the greatest cavalry battle of the war had played out across its fields and now headquarters for Maj. Gen. George Meade's Army of the Potomac. Gen. Meade reorganized the army in March 1864, and in the shuffle broke up the venerable Hooker Brigade, in existence since late summer of 1861.

In an effort to keep the brigade together for a few more months, until the three-year enlistments of its veterans would expire, the junior officers protested the order. Five of the so-called ring leaders were charged with mutiny and other offenses and court-martialed. Four of the five were from the 11th Massachusetts, a unit that wore the white diamond insignia of the Hooker Brigade with unbounding pride and honor.

Another focus of their unhappiness was Gen. Joseph B. Carr, their new division commander, considered by the men to be sadistic, corrupt, incompetent, and cowardly. Carr had a special feud with one of the defendants, Lt. Henry N. Blake, the historian of the 11th Mass., who was, with his ascerbic observation, an early and very loud whistle blower.

The problems of reorganization were exacerbated by personal animosity between two of the bravest regimental commanders of the Hooker Brigade, the cussing, hard-drinking, Col. William Blaisdell of the 11th Massachusetts and the abstemious, soft-spoken, Col. Robert McAllister of the 11th New Jersey.

The story follows the key players through the reorganization, the courts-martial, and into the Wilderness -- where many of them perished -- using direct quotes from their diaries, memoirs, and reports, as well as original transcripts of the trials.