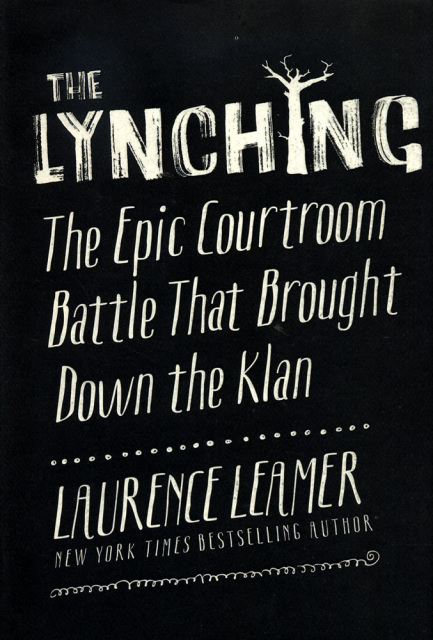 The Lynching is the powerful, spellbinding true story of a brutal race-based killing in 1981 and the dramatic two trials during which the United Klans of America, the largest and most dangerous Klan organization in America, is exposed for the evil it represents. New York Times bestselling author Laurence Leamer tells a gripping story, weaving in such figures as legendary civil rights lawyer Morris Dees, Alabama governor George Wallace, and Klan Imperial Wizard Robert Shelton, and describes the Klan's lingering effect on race relations in America today.

The story begins in March 1981, when Henry Hays and James Knowles, members of Klavern 900 of the UKA, picked up nineteen-year-old Michael Donald on the streets of Mobile, Alabama. They were seeking to retaliate after a largely black jury failed to convict a black man accused of murdering a white policeman. Hays and Knowles beat Donald, cut his throat, and left his body hanging from a tree branch in a racially mixed residential neighborhood. Arrested, charged, and convicted, Hays was sentenced to death -- the first time in more than half a century that the state of Alabama had given that penalty to a white man for killing a black man.

Morris Dees, the cofounder of the Southern Poverty Law Center, saw the case as an opportunity to file a lawsuit against the UKA. His colleagues told him that his lawsuit was impossible to win and a folly. But Dees had heard that before. On behalf of Michael's grieving mother, Mrs. Beulah Donald, Dees filed a first-of-its-kind civil suit and charged the Klan organization and its leaders with conspiracy. He proceeded to put the Klan leaders on trial, which produced some of the most audacious testimony of any civil rights trial -- as well as a stunning and precedent-setting verdict. Dees destroyed the UKA and created a weapon that the SPLC used time and again against other racist organizations.

The Lynching is a suspenseful true story that takes us into the heart of darkness, but in the end shows that Michael Donald and other civil rights martyrs did not die in vain.