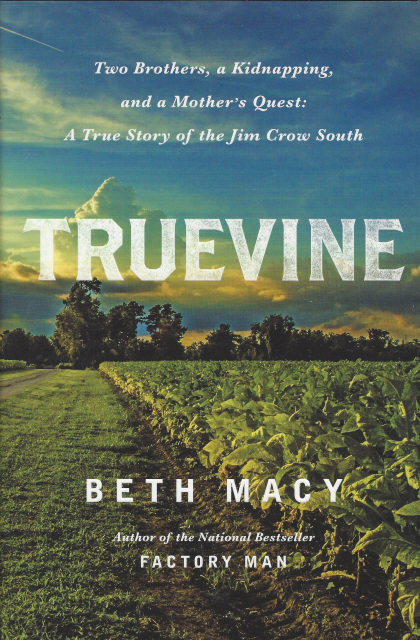 TRUEVINE: TWO BROTHERS, A KIDNAPPING, AND A MOTHER'S QUEST -- A TRUE STORY OF THE JIM CROW SOUTH by Beth Macy

Truevine: Two Brothers, A Kidnapping, and a Mother's Quest -- A True Story of the Jim Crow South by Beth Macy

The year was 1899, as the old people told the story; the place, a sweltering tobacco community in the Jim Crow South called Truevine, where everyone they knew was either a former slave or a child or grandchild of slaves.

From the author of the New York Times bestseller Factory Man, Truevine is a journalistic triumph, the result of hundreds of interviews and a quarter century of research. Though the narrative of George and Willie Muse has been passed down for over a century, no writer has ever gotten this close to the beating heart of their story and its mysteries: Were they really kidnapped an put into servitude by the circus? How did their mother, a black maid toiling under the harsh restrictions of segregation, bring them home? And why, after getting there, would they ever want to go back?

At the height of their fame, the Muse brothers performed for British royalty and headlined more than a dozen sold-out shows at New York's Madison Square Garden. They were fine musicians and global superstars in a pre-broadcast era. But the very root of their success hinged on the color of their skin and on the outrageous caricatures they were forced to assume: cannibals, sheep-headed freaks, even "Ambassadors from Mars."

Beth Macy is a master chronicler of life in the South, and her exclusive interviews and sources make for a riveting American story about race, greed, and a mother's love. These were two little boys born in a brutal time, sharecropping a field in the segregated South, stolen away by a white man offering candy, and set on a path of events that would forever change their lives -- and their family's destiny. The full story of what happened in Truevine, Virginia, is unforgettable.