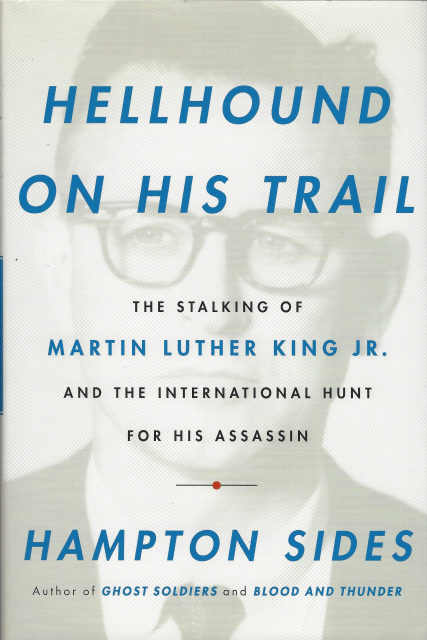 HELLHOUND ON HIS TAIL: THE STALKING OF MARTIN LUTHER KING JR. AND THE INTERNATIONAL HUNT FOR HIS ASSASSIN by Hampton Sides

Hellhound on his Trail: The Stalking of Martin Luther King Jr. and the International Hunt for His Assassin by Hampton Sides

On February 1, 1968, in Memphis, Tennessee, two garbage men were crushed to death by the hydraulic press of their antiquated truck. The exclusively African American workforce, which labored for long hours with little pay, went on strike. A month later, the Reverend Martin Luther King Jr. joined their cause. Exhausted by constant death threats and the toll of his punishing schedule, the Nobel laureate was at the nadir of his extraordinary career. Beset on the left by the Black Power movement, which felt his nonviolent methods were a form of Uncle Tomism, and viciously harassed by J. Edgar Hoover, who considered him a dangerous radical, King desperately wanted to further his faltering civil rights crusade. But the garbage workers' march down Beale Street, the historic avenue of the blues, turned violent. Humiliated, King vowed to return to Memphis in April.

In Hampton Sides's electrifying account, we see these two men -- one whose courage and savvy embodied one of the twentieth centuries' greatest causes; th other who lived his stunted life in the shadows -- as they crisscross the country. Galt stalking Kin, until the devastating moment at a Memphis motel when the drifter catches up with his prey.

Against the backdrop of the resulting nationwide riots, political crises, and the pathos of King's funeral, Sides deftly weaves a crosscut narrative of the assassin's flight and the massive, desperate search to find him -- led, ironically, by the same FBI whose director had hoped to hound King to death. The epic chase would involve thousands of agents, traverse multiple countries, and take three months of meticulous detective work until Galt -- a.k.a. Harvey Lowmeyer, a.k.a. Ramon George Sneyd, a.k.a. James Earl Ray -- was captured only days before he planned to take refuge in the racist state of Rhodesia.

Magnificent in scope, relentless in narrative drive, drawing on a wealth of previously unpublished material, Hellhound on His Trail is a profound examination of the costs of hatred -- and how history is often a matter of the petty bringing down the great.