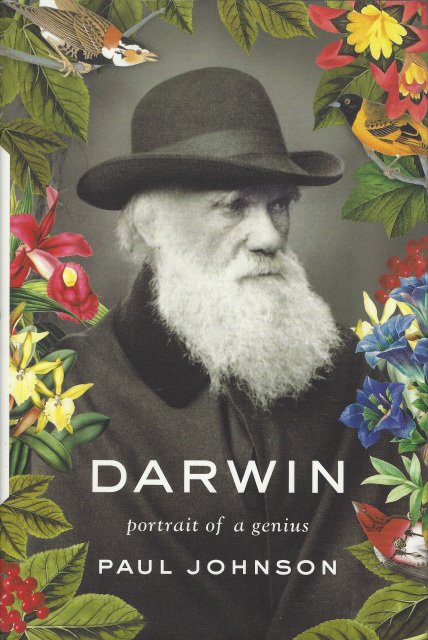 DARWIN: PORTRAIT OF A GENIUS by Paul Johnson

Darwin: Portrait of a Genius by Paul Johnson

With his Origin of Species, Charles Darwin forever changed our concept of the world's creation and its evolution. Darwin's revolutionary career is the perfect vehicle for Paul Johnson, "the most celebrated and best-loved British historian in America" (Wall Street Journal), who here turns his keen biographer's eye to Darwin, one of history's most influential figures.

Never has a scientist been so favored by fortune, observes Johnson. Darwin came from a line of gifted intellectuals, with great wealth on both sides of his family. He went to the best schools but was a mediocre student. Though he struggled with studies in medicine and, later, the ministry that his father insisted on, Darwin was rescued by a professor's recommendation that he serve as the scientist on the HMS Beagle. He set off on the five-year voyage, and by the time they reached the Galapagos Islands, he wrote that "we seem to be brought near the great fact -- the mystery of mysteries -- the first appearance of new beings on this earth."

Yet Darwin kept postponing publication of his groundbreaking theory because he feared society's -- and his wife's -- disapproval. Only when Darwin realized that another eminent scientist, Alfred Russel Wallace, was pursuing similar ideas and was about to publish them did Darwin race to produce a popular treatment of the theory. As Johnson notes, "In what we have seen to be a remarkably lucky life, this was the greatest stroke of good fortune he enjoyed." The Origin of Species sealed Darwin's fate as the discoverer of the theory.

Johnson sees it as tragic, then, that Darwin moved beyond the realm of plants and animals, where his observational skills were extraordinary, into the realm of humans, where his less astute anthropology informed The Descent of Man, which provided support for the period's burgeoning eugenics movement and the Social Darwinist ideology.

This is a bracing exploration of Darwin's wondrous feats as well as his weaknesses. As always, Johnson makes "his subjects human and fallible enough that we would, indeed, recognize them instantly -- while also illuminating what made them heroes" (The Washington Post).