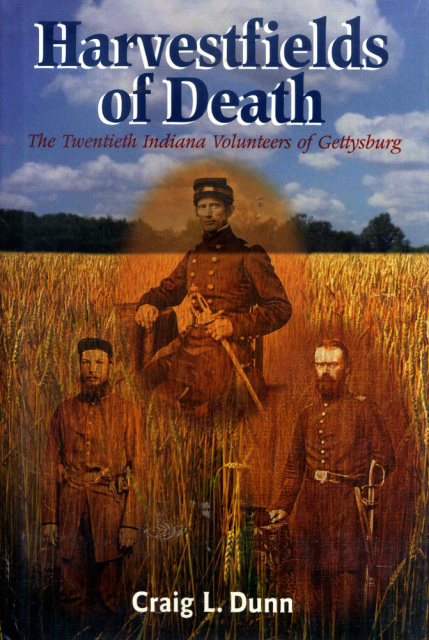 HARVESTFIELDS OF DEATH: THE TWENTIETH INDIANA VOLUNTEERS OF GETTYSBURG by Craig L. Dunn

Harvestfields of Death: The Twentieth Indiana Volunteers of Gettysburg by Craig L. Dunn

Noted Civil War historian Bruce Catton said, "It was the Midwestern regiments, men from Indiana, Michigan, Ohio, Illinois, and Wisconsin, who eventually won the war for Lincoln. The Midwest's supply depots and railroads supplied the war, its crops sustained the armies, but most of all its men, fresh from the frontier with strong bodies and strong fighting spirit, lent a determination that eventually saw the war through to its successful conclusion for the North."

Nowhere is this Midwestern determination and fighting spirit better seen than in the career of the Twentieth Indiana. Raised when the threat of invasion of Indiana and Ohio was the strongest, the unit went head-to-head with the Confederate ironclad Merrimac, and fought valiantly in the morass of the Seven Days battles, Second Manassas, and finally -- and memorably -- in the Wheatfield at Gettysburg.

Craig Dunn has used hundreds of private documents and scores of pictures from his extensive collection to tell the story of these feisty individualist Hoosiers who wrote their names in blood across the harvestfields of the Eastern theater of war.