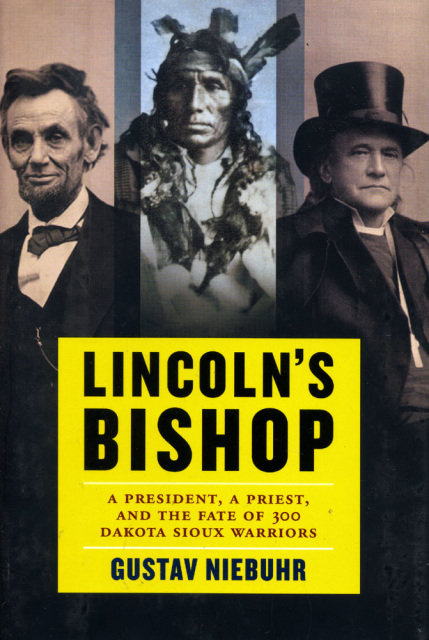 LINCOLN'S BISHOP: A PRESIDENT, A PRIEST, AND THE FATE OF 300 DAKOTA SIOUX WARRIORS by Gustav Niebuhr

Lincoln's Bishop: A President, A Priest, and the Fate of 300 Dakota Sioux Warriors by Gustav Niebuhr

It is hard to recall what powerful moral voices Protestant church leaders had in the formative years of the nation. Gustav Niebuhr travels back to the Minnesota frontier of 1862 when Dakota Sioux rose up against pioneering families and slaughtered hundreds. Citizens demanded mass executions and deportations. Into this turmoil stepped Henry Benjamin Whipple, the state's first Episcopal bishop.

Whipple had already loudly decried the crimes and corruption of those managing Indian affairs and warned of calamity. Now he made the case of mercy and a deeper justice, which eventually let to meeting with President Lincoln. Despite being preoccupied with the Civil War, Lincoln was moved to intervene, surprisingly taking the time to review all 303 cases and overturning the death sentence for most of the Indians. Nevertheless, the result was still the largest single execution on American soil.

If not for Whipple's vigorous campaigning, both in state and in Washington, D.C., a greater tragedy might well have occurred. His success should haunt us: Where today do we hear these trumpet calls for justice like those given by figures such as Bishop Henry Benjamin Whipple?