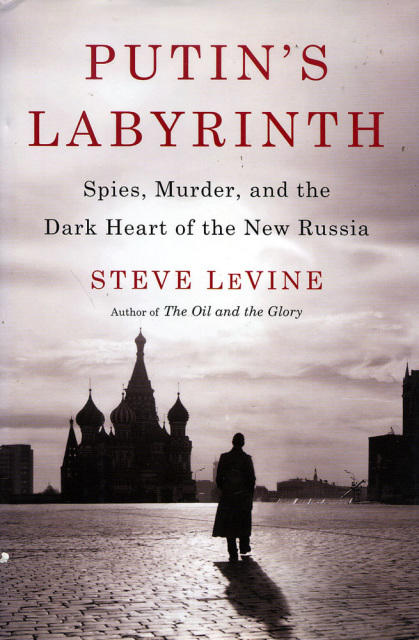 PUTIN'S LABYRINTH: SPIES, MURDER, AND THE DARK HEART OF THE NEW RUSSIA by Steve LeVine

Putin's Labyrinth: Spies, Murder, and the Dark Heart of the New Russia by Steve LeVine

The new Russia is marching in an alarming direction. Emboldened by escalating oil wealth and newfound prominence as a world power, Russia, under the leadership of Vladimir Putin, has veered back toward the authoritarian roots planted in Imperial/Czarist times and firmly established during the Soviet era. Though Russia has a new president, Dmitri Medvedev, Putin remains in control, rendering the democratic reforms of the post-Soviet order irrelevant. Now, in Putin's Labyrinth, acclaimed journalist Steve LeVine, who lived in and reported from the former Soviet Union for more than a decade, provides a penetrating account of modern Russia under the repressive rule of an all-powerful autocrat. LeVine portrays the growth of a "culture of death" -- from targeted assassinations of the state's enemies to the Kremlin's indifference when innocent hostages are slaughtered.

Drawing on new interviews with eyewitnesses and the families of victims, LeVine documents the bloodshed that has stained Putin's two terms as president. Among the incidents chronicled in these pages: The 2002 terrorist takeover of a crowded Moscow theater -- which led to the government gassing the building, and the deaths of more than a hundred terrified hostages -- seen here from new angles, through the riveting words of those who survived, and the murder of courageous investigative reporter Anna Politkovskaya, shot in the elevator of her apartment building on Putin's birthday, purportedly as a malicious "gift" for the president from supporters. Finally, a shocking story that made international headlines -- the 2006 death of defector Alexander Litvinenko in London -- is dramatized as never before. LeVine traces the steps of this KGB-spy-turned-dissident on his way to being poisoned with polonium-210, a radioactive isotope. And in doing so, LeVine is granted a rare series of interviews with a KGB defector who was nearly killed in strangely similar circumstances fifty years earlier. Through LeVine's exhaustive research, we come to know the victims as real people, not just names in brief news accounts of how they died.

Yet Putin's Labyrinth is more than an immensely readable expose. It is highly personal, with the flavor of a memoir. It is a thoughtful book that examines the perplexing question of how Russians manage to negotiate their way around the ever-present danger of violence. It calculates the emotional toll that this lethal maze is exacting on ordinary people, even as they enjoy a dramatically heightened standard of living. Most ominously, it assesses the reopening of hostilities with the West, and the forces that are driving this major new confrontation.