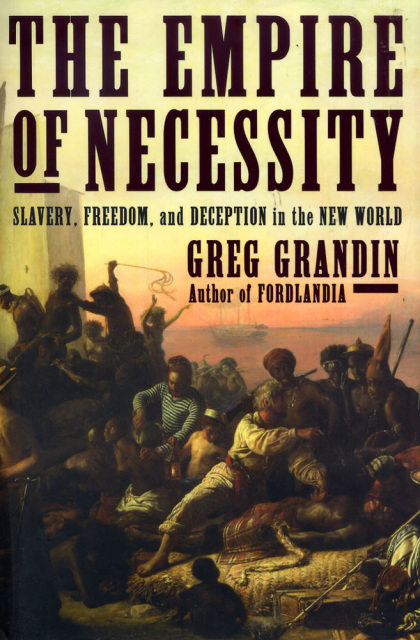 One morning in 1805, off a remote island in the South Pacific, Captain Amasa Delano, a New England seal hunter, climbed aboard a distressed Spanish ship carrying scores of West Africans who appeared to be slaves. They weren't. In fact, they were performing an elaborate ruse, having risen up earlier and slaughtered most of the crew and officers. When Delano, an anti-slavery republican, finally realized the deception -- that the men and women he thought were humble slaves were actually running the ship -- he rallied his crew to respond with savage violence.

Drawing on research on four continents, The Empire of Necessity is the untold history of this extraordinary event and its bloody aftermath. With the same gripping storytelling that won praise for his Fordlandia, historian Greg Grandin tracks the West Africans through the horrors of the Middle Passage and their forced march from the Argentine pampas to the cold, high Andes, providing a new transnational history of slavery in the Americas. He also follows Delano as he sails the Pacific to kill seals, part of a generation of mariners who were setting up the United States' first informal island colonies -- their slide from benevolence to barbarism an expression of the human exploitation and environmental destruction that marked the early years of American expansion.

Delano's blindness that day has already inspired one masterpiece -- Herman Melville's Benito Cereno. Now Grandin returns to the event to paint an indelible portrait of a world in the throes of revolution, of people -- slaves, sailors, and sealers -- trying to claim the promise of freedom, law, and reason only to find that the shackles of slavery were not so easily cast off.