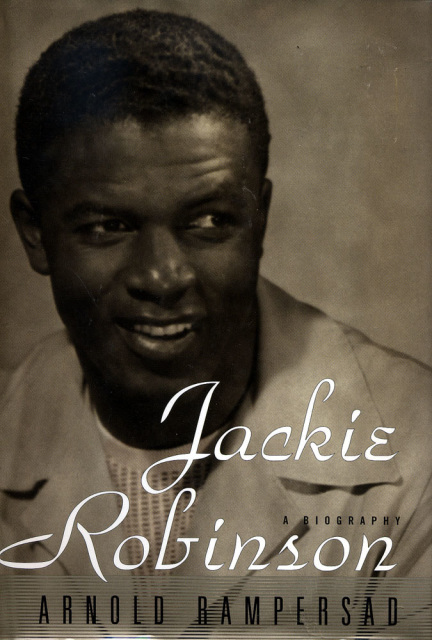 The extraordinary life of Jackie Robinson is illuminated as never before in this full-scale biography by Arnold Rampersad, who was chosen by Jack's widow, Rachel, to tell her husband's story, and was given unprecedented access to his private papers. We are brought closer than we have ever been to the great ballplayer, a man of courage and quality who became a pivotal figure in the areas of race and civil rights.

Born in the rural South, the son of a sharecropper, Robinson was reared in southern California. We see him blossom there as a student-athlete as he struggled against poverty and racism to up hold the beliefs instilled in him by his mother -- faith in family, education, America, and God.

We follow Robinson through World War II, when, in the first wave of racial integration in the armed forces, he was commissioned as an officer, then court-martialed after refusing to move to the back of a bus. After he plays in the Negro National League, we watch the opening of an all-American drama as, late in 1945, Branch Rickey of the Brooklyn Dodgers recognized Jack as the right player to break baseball's color barrier -- and the game was forever changed.

Jack's never-before-published letters open up his relationship with his family, especially his wife, Rachel, whom he married just as his perilous venture of integrating baseball began. Her memories are a major resource of the narrative as we learn about the severe harassment Robinson endured from teammates and opponents alike; about death threats and exclusion; about joy and remarkable success. We watch his courageous response to abuse, first as a stoic endurer, then as a fighter who epitomized courage and defiance.

We see his growing friendship with white players like Pee Wee Reese and the black teammates who followed in his footsteps, and his embrace by Brooklyn's fans. We follow his blazing career: 1947, Rookie of the Year; 1949, Most Valuable Player; six pennants in ten seasons, and in 1962, induction into the Baseball Hall of Fame.

But sports were merely one aspect of his life. We see his business ventures, his leading role in the community, his early support of Martin Luther King Jr., his commitment to the civil rights movement at a crucial stage in its evolution; his controversial associations with Eisenhower, Kennedy, Nixon, Humphrey, Goldwater, Nelson Rockefeller, and Malcolm X.

Rampersad's magnificent biography leaves us with an indelible image of a principled man who was passionate in his loyalties and opinions: a baseball player who could focus a crowd's attention as no one before or since; an activist at the crossroads of his people's struggle; a dedicated family man whose last years were plagued by illness and tragedy, and who died prematurely at fifty-two. He was a pathfinder, an American hero, and he now has the biography he deserves.