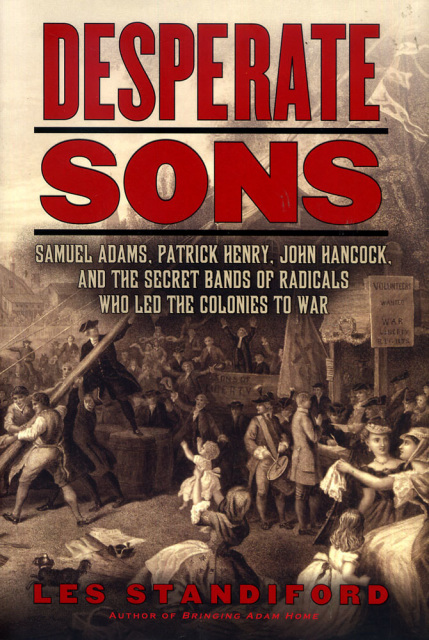 DESPERATE SONS: SAMUEL ADAMS, PATRICK HENRY, JOHN HANCOCK, AND THE SECRET BANDS OF RADICALS WHO LED THE COLONIES TO WAR by Les Standiford

Desperate Sons: Samuel Adams, Patrick Henry, John Hancock, and the Secret Bands of Radicals Who Led the Colonies to War by Les Standiford

More than two hundred years ago, a group of British colonists in America decided that the conditions under which they were governed had become intolerable. Angry and frustrated that King George III and the British Parliament had ignored their lawful complaints and petitions, they decided to take action.

Knowing that their deeds -- often directed at individuals and property -- were illegal, and punishable by imprisonment and even death, these agitators plotted and conducted their missions in secret to protect their identities as well as the identities of those who supported them. Calling themselves the Sons of Liberty, they gathered together in a radical society committed to imposing forcible change. Those determined men -- including second cousins Samuel and John Adams, Paul Revere, Patrick Henry, and John Hancock -- saw themselves as patriots. Yet to the Crown and to many of the Sons' fellow colonists, the revolutionaries were terrorists who deserved death for their treason.

In this gripping narrative, Les Standiford reveals how this group of intelligent, committed men, motivated by economics and political belief, began a careful campaign of interlocking events that would channel feelings of vague injustice into an armed rebellion of common cause, which would defeat an empire and give birth to a radical political experiment -- a new nation known as the United States.