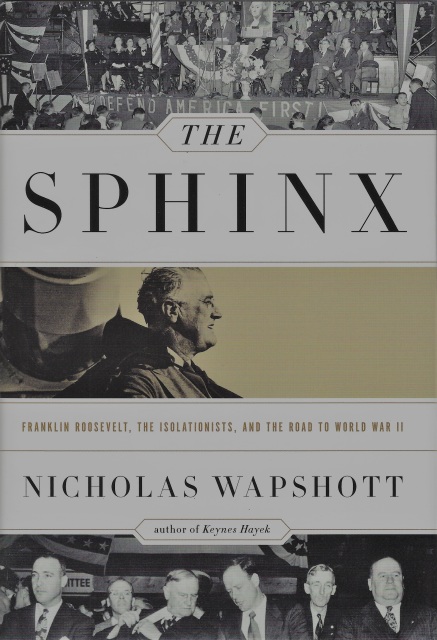 MAY 1938. Franklin Delano Roosevelt -- recently reelected to a second term as president -- sat in the Oval Office and contemplated two possibilities: the rule of fascism overseas, and a third term.

With Hitler's reach extending into Austria, and with the atrocities of World War I still fresh in the American memory, Roosevelt faced the question that would prove one of the most defining in American history: whether to once again to go to war in Europe.

In The Sphinx, Nicholas Wapshoot recounts how an ambitious and resilient Roosevelt -- nicknamed "the Sphinx" for his cunning, cryptic rapport with the press -- devised and doggedly pursued a strategy to sway the American people to abandon isolationism and take up the mantle of the world's most powerful nation.

Chief among Roosevelt's antagonists was his friend Joseph P. Kennedy, a stock market magnate and the patriarch of what was to become one of the nation's most storied dynasties. Kennedy's financial, political, and personal interests aligned him with a war-weary American public, and he counted among his isolationist allies no less than Walt Disney, William Randolph Hearst, and Henry Ford -- prominent businessmen who believed America had no business in conflicts across the Atlantic.

With millions of lives -- and a future paradigm of foreign intervention -- hanging in the balance, The Sphinx captures a political giant at the height of his powers and an American identity crisis that continues to this day.