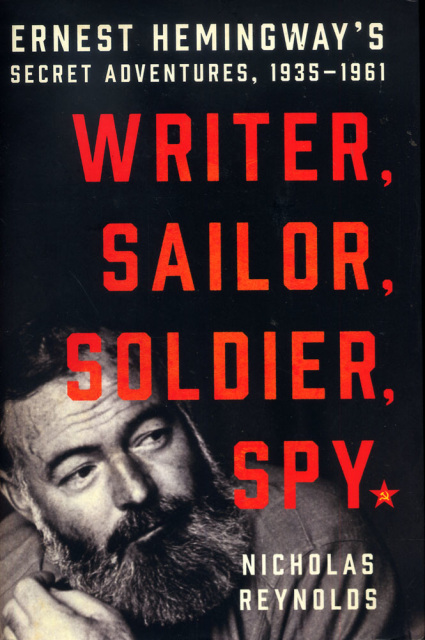 In 2010, while he was the historian at the esteemed CIA Museum, Nicholas Reynolds, a longtime American intelligence officer, former U.S. Marine colonel, and Oxford-trained historian, began to uncover clues suggesting Nobel Prize-winning novelist Ernest Hemingway's involvement in mid-twentieth-century spycraft was far more complex, sustained, and fraught with risks than has been previously understood. Now Reynolds deeply researched and captivating narrative reveals his discoveries for the first time, bringing to light the whole story of this hidden side of Hemingway's life: his troubling recruitment by Soviet spies to work with the NKVD, the forerunner to the KGB, followed in short order by a complex set of secret relationships with American agencies, including the FBI, the Department of State, the Office of Naval Intelligence (ONI), and the Office of Strategic Services (OSS), a precursor to the CIA.

Starting with Hemingway's sympathy to the antifascist forces during the 1930s, Reynolds illuminates Hemingway's immersion in the life-and-death world of the revolutionary left, from his passionate commitment to the Spanish Republic; his successful pursuit by Soviet NKVD agents, who valued Hemingway's influence, access, and mobility; his wartime meeting in East Asia with communist leader Chou En-lai, the future premier of China; and finally to his undercover involvement with Cuban rebels in the late 1950s and his sympathy for Fidel Castro. Reynolds equally explores Hemingway's participation in various roles as an agent for the U.S. government, including hunting Nazi submarines with ONI-supplied munitions in the Caribbean on his boat, Pilar, his command of an informant ring in Cuba called the "Crook Factory" that reported to the embassy in Havana; and his on-the-ground role in Europe, where he helped OSS gain key tactical intelligence for the liberation of Paris and fought alongside the infantry in the bloody endgame of World War II.

As he examines the links between Hemingway's work as an operative and as an author, Reynolds reveals how Hemingway's secret adventures influenced his literary output and contributed to the writer's block and mental decline (including paranoia) that plagued him during the postwar years -- a period marked by the Red Scare and McCarthy hearings, which destroyed the life of anyone with Soviet connections. Reynolds also illuminates how those same experiences played a role in some of Hemingway's greatest works, while also adding to the burden that he carried at the end of his life, and perhaps contributing to his suicide.