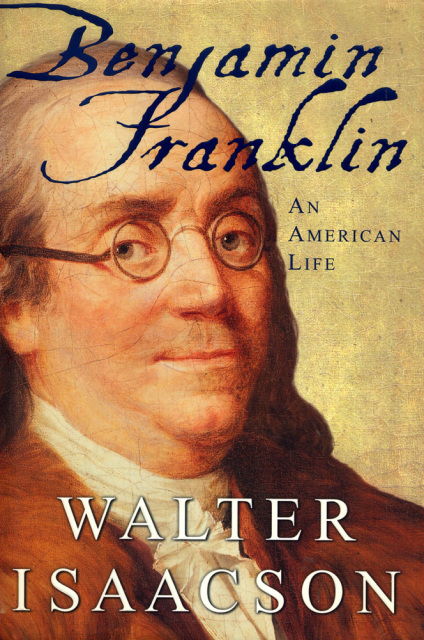 Benjamin Franklin is the Founding Father who winks at us. An ambitious urban entrepreneur who rose up the social ladder, from leather-aproned shopkeeper to dining with kings, he seems made of flesh rather than of marble. In bestselling author Walter Isaacson's vivid and witty full-scale biography, we discover why Franklin seems to turn to us from history's stage with eyes that twinkle from behind his new-fangled spectacles. By bringing Franklin to life, Isaacson shows how he helped to define both his own time and ours.

He was, during his 84-year life, America's best scientist, inventor, diplomat, writer, and business strategist, and he was also one of its most practical -- though not most profound -- political thinkers. He proved by flying a kite that lightning was electricity, and he invented a rod to tame it. He sought practical ways to make stoves less smoky and commonwealths less corrupt. He organized neighborhood constabularies and international alliances, local lending libraries, and national legislatures. He combined two types of lenses to create bifocals and two concepts of representation to foster the nation's federal compromise. He was the only man who shaped all founding documents of America: The Albany Plan of Union, the Declaration of Independence, the treaty of alliance with France, the peace treaty with England, and the Constitution. And he helped invent America's unique style of homespun humor, democratic values, and philosophical pragmatism.

But the most interesting thing that Franklin invented, and continually reinvented, was himself. America's first great publicist, he was, in his life, and in his writings, consciously trying to create a new American archetype. In the process, he carefully crafted his own persona, portrayed it in public, and polished it for posterity.

Through it all, he trusted the hearts and minds of his fellow "leather-aprons" more than he did those of any inbred elite. He saw middle-class values as a source of social strength, not as something to be derided. His guiding principle was a "dislike of everything that tended to debase the spirit of the common people." Few of his fellow founders felt this comfort with democracy so fully, and none so intuitively.

In this colorful and intimate narrative, Isaacson provides the full sweep of Franklin's amazing life, from his days as a runaway printer to his triumphs as a statesman, scientist, and Founding Father. He chronicles Franklin's tumultuous relationship with his illegitimate son and grandson, his practical marriage, and his flirtations with the ladies of Paris. He also shows how Franklin helped to create the American character and why he has a particular resonance in the twenty-first century.