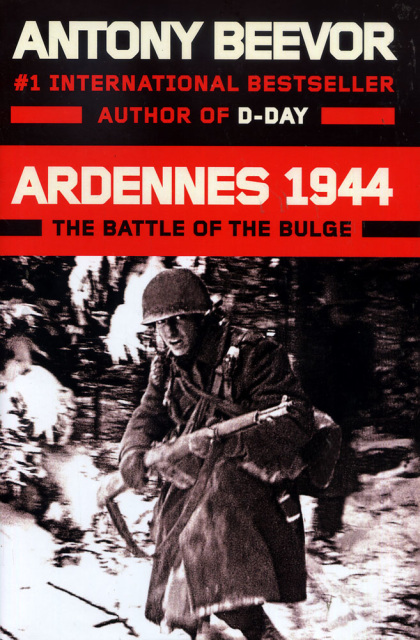 Ardennes, 1944: The Battle of the Bulge by Antony Beevor

Ardennes 1944: The Battle of the Bulge by Antony Beevor

Hitler launched his last gamble in the snow-covered forests and gorges of the Belgian Ardennes, believing he could split the Allies by advancing all the way to Antwerp and forcing the Canadians and British out of the war. Although his generals were doubtful of success, younger officers and NCOs were desperate to believe that their homes and families could be saved from the vengeful Red Army approaching from the east. Many were exultant at the prospect of striking back.

The Allies, taken by surprise, found themselves fighting two Panzer armies. Belgian civilians fled, justifiably afraid of German reprisals. Panic spread even to Paris. While some American soldiers, overwhelmed by the German onslaught, ran away or surrendered, others held on heroically, creating breakwaters that slowed the German advance.

The harsh winter conditions and the savagery of the battle became comparable to the eastern front. There was terrible ferocity on both sides, driven by desperation and revenge, in which the normal rules of combat were breached. The Ardennes -- involving more than a million men, almost half of them American -- would prove to be the battle that finally broke the back of the Wehrmacht.

In this deeply researched work, with striking insights into the major players on both sides, Antony Beevor gives us the truest account yet of the Ardennes offensive, which was to become the greatest battle of the western front in World War II.