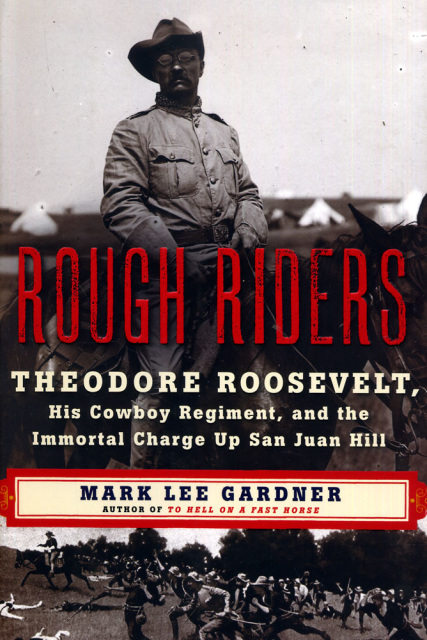 The explosion of the USS Maine in Havana Harbor in February 1898 stunned the world and triggered a war between the United States and Spain. Congress authorized President McKinley to recruit a volunteer force to help drive the Spaniards out of Cuba, and from these men emerged the legendary Rough Riders, a mounted regiment drawn from America's western territories and led by the irrepressible Theodore Roosevelt. Its ranks included not only cowboys and other Westerners, but also several Ivy Leaguers and clubmen, many of them friends of "TR." Roosevelt and his men quickly came to symbolize American ruggedness, daring, and individualism. He led them to victory in the famed Battle of San Juan Hill, which made TR a national hero and cemented the Rough Riders' place in history.

Now Mark Lee Gardner synthesizes previously unknown primary accounts -- private letters, diaries, and period newspaper reports from public and private archives in Arizona, Texas, Oklahoma, New Mexico, Massachusetts, New York, and Washington, D.C. -- to breathe fresh life into the Rough Riders and pay tribute to their daring feats and indomitable leader. Gardner also explores lesser-known aspects of the story, including the Rough Riders' relationship with the African American Buffalo Soldiers, with whom they fought side by side at San Juan Hill.

Rich with action, violence, camaraderie, and courage, Rough Riders sheds new light on the Theodore Roosevelt saga -- and on one of the most thrilling chapters in American history.