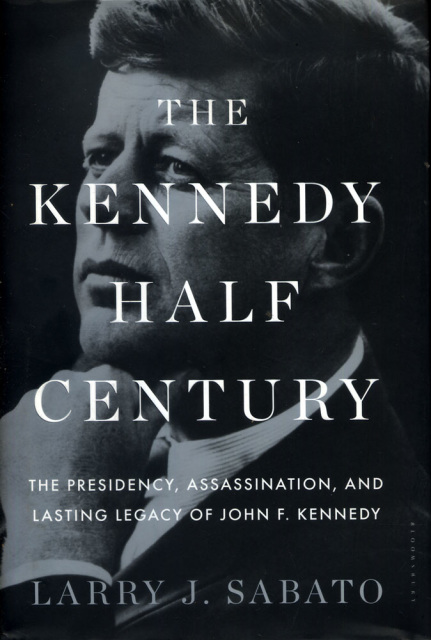 When John F. Kennedy entered the presidential limousine at Love Field on November 22, 1963, he began his ride into history. On the fiftieth anniversary of his assassination, celebrated political scientist Larry J. Sabato -- himself inspired as a child by JFK and his presidency -- explores the fascinating, powerful, and often controversial influence that Kennedy still wields in politics and among the public.

From Lyndon Johnson to Ronald Reagan to George W. Bush and Barack Obama, The Kennedy Half-Century uncovers the many ways that JFK's successors have drawn from his record and image to support their own initiatives and deflect criticism from their own performance.

Polls frequently show JFK with the highest job approval rating of any American president in the modern era, and millions remain captivated by his one thousand days in the White House. For the first time, Sabato explores this phenomenon using the most extensive survey ever undertaken on the public's view of a historical figure, showing the powerful effects JFK's assassination and the memory of his time in office have had on Americans of every modern generation.

Sabato chronicles the dramatic, contentious campaign that brought JFK to the Oval Office, and the events over the next three years that ultimately led him to his death in Dealey Plaza. His pulsating and revealing reexamination of JFK's assassination is based on heretofore unknown information to which Sabato has had exclusive access, and it significantly recasts our understanding of that fateful day in Dallas.

The Kennedy Half-Century reveals a clear ribbon of Kennedy influence -- sometimes positive, sometimes not -- that weaves through ten presidential administrations and more than five decades of American history. No other recent U.S. president has achieved such a lengthy legacy. Among the hundreds of books devoted to JFK, The Kennedy Half-Century will provide anyone who reads it with a new appreciation for the profound impact JFK's brief presidency has had on our national psyche.