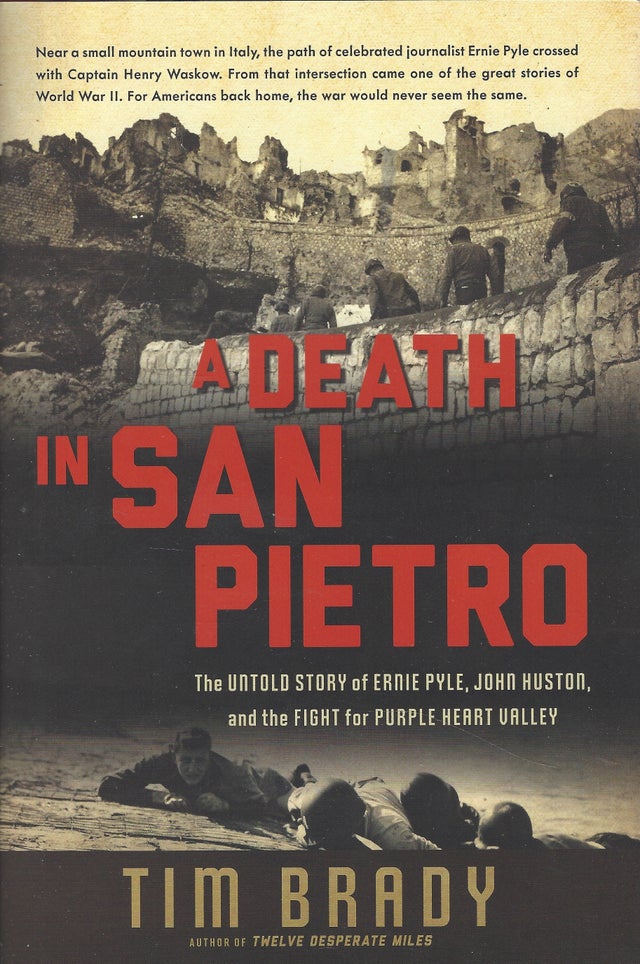 A Death in San Pietro: The Untold Story of Ernie Pyle, John Huston, and the Fight for Purple Heart Valley by Tim Brady

A Death in San Pietro: The Untold Story of Ernie Pyle, John Huston, and the Fight for Purple Heart Valley by Tim Brady

December 1943. In war-ravaged Italy near a small village north of Naples, the paths of three men -- platoon leader Captain Henry Waskow, award-winning journalist Ernie Pyle, and the young filmmaker John Huston -- crossed. They would never speak a word to each other, would never share a drink or a cigarette; but fate was about to draw them together. And as fate would have it, they were about to make one of the great stories of World War II.

By the time Mark Clark's Fifth Army reached the Liri Valley in south-central Italy, a tough but rapid sweep through Sicily had come to a muddy halt. A battle-hardened German army was entrenched on the mountains surrounding the tiny village of San Pietro with every intention of stopping Clark's determined march to Rome. On the slopes of one of those mountains, the death of a single platoon captain, Henry Waskow, would come to epitomize the struggle.

A Death in San Pietro chronicles the quietly heroic and beloved Captain Waskow as he and his company survive weeks of struggle in the rugged terrain of Italy, only to meet a harsh fate on a cold and barren mountaintop. Waskow's 36th ("Texas") Division would ultimately succeed in driving the Germans off the mountain, but not before eighty percent of Waskow's company is lost in action.

From this single struggle would come two of the war's longest-lasting artistic expressions. Already dubbed "Purple Heart Valley" by the men of the 36th, the struggle around San Pietro brought horrified focus to the war. Pulitzer Prize-winner Ernie Pyle's dispatch about Waskow's death and filmmaker John Huston's award-winning documentary of the battle would rivet -- and shock -- the nation, bringing, as if for the first time, the awful carnage of world war into living rooms across America.