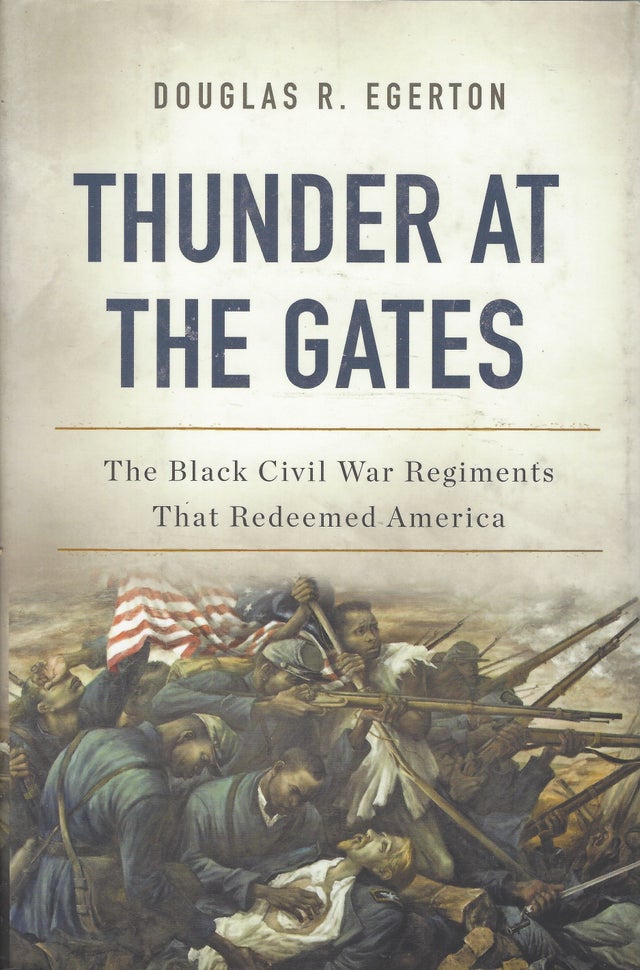 Thunder at the Gates: The Black Civil War Regiments that Redeemed America by Douglas R. Egerton

Thunder at the Gates: The Black Civil War Regiments that Redeemed America by Douglas R. Egerton

Almost immediately after Abraham Lincoln issued the Emancipation Proclamation on January 1, 1863, abolitionists began to call for the raising of black regiments. The South and most of the North responded with outrage -- southerners vowed to enslave black soldiers captured in battle, while many northerners claimed that blacks lacked the courage to fight. Yet Boston's Brahmins, always eager for a moral crusade, launched one of the greatest experiments in American history.

In Thunder at the Gates, Douglas R. Egerton chronicles the formation and exploits of the 54th and 55th Massachusetts Infantry and the 5th Massachusetts Cavalry -- regiments led by whites but composed of black men born free or into slavery. He tracks an astonishing cast of characters, including the runaway slave William Carney, who became the first black soldier to receive the Medal of Honor; Charles and Lewis Douglass, the talented offspring of the famous abolitionist; and Robert Gould Shaw, the scion of a prosperous family who reluctantly took the job of leading the 54th, only to win enduring fame on the battlefield.

From the disastrous siege of Charleston's Fort Wagner to the brutally intimate encounter at the Battle of Olustee in Florida, Egerton masterfully evokes the horror of nineteenth-century warfare. He shows the regiments sacking plantations across the South -- not as plunderers, but as liberators. In the final count, he argues that the regiments' defining victories came on the field of public opinion: their successes made possible not only the recruitment of 200,000 additional black soldiers, but the very ideas of black citizenship and equality in America. In fighting with distinction, these valiant regiments transformed the Civil War from a white man's conflict into a revolutionary struggle for freedom.