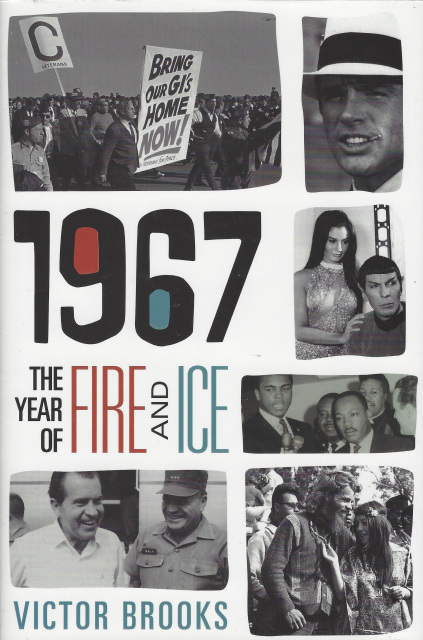 1967: THE YEAR OF FIRE AND ICE by Victor Brooks

1967: The Year of Fire and Ice by Victor Brooks

On New Year's Day in 1967, the 200 million Americans who lived in the United States were about to experience a fascinating, exciting, and sometimes bewildering twelve months that for many formed an iconic portion of their lives. Despite the fact that the coming year produced no Black Friday, Pearl Harbor, or 9/11 attack, the nation still underwent dramatic changes in everything from support for the Vietnam War to approval of candidates for the 1968 presidential election to attitudes toward sex with strangers and what constitutes the status quo.

Almost without significant forewarning, Americans in 1967 witnessed a simultaneous cooling of Cold War tensions with the Soviet Union while the war in Vietnam exploded into a white-hot conflict that inflicted nearly two hundred American battle deaths a week. Meanwhile, young people at home were alternately listening to the "cool" sound of the Beatle's new Sgt. Pepper's Lonely Hearts Club Band and Jim Morrison's plea to get even higher in "Light My Fire." On television an emotional, passionate James T. Kirk shared an Enterprise bridge with the cool and logical Mr. Spock.

Victor Brooks explores what happened -- and, in some cases, did not happen -- to these 200 million Americans in the national roller coaster ride that was the year 1967. He chronicles a society that proportionally had far more young people than is the case five decades later, with a widely publicized generation gap that produced more arguments, tension, and anguish between young and old Americans than any twenty-first-century counterpart.

1967 is a fascinating, wide-ranging exploration including topics ranging from the first Super Bowl, the beginning of the 1968 presidential campaign, the social impact of the "Summer of Love" in San Francisco and the American combat experience in an expanding war in Vietnam. The book represents a reunion of sorts for Baby Boomers as well as a guidebook for younger readers on how their elders coped with one of the definitive years of a pivotal decade.