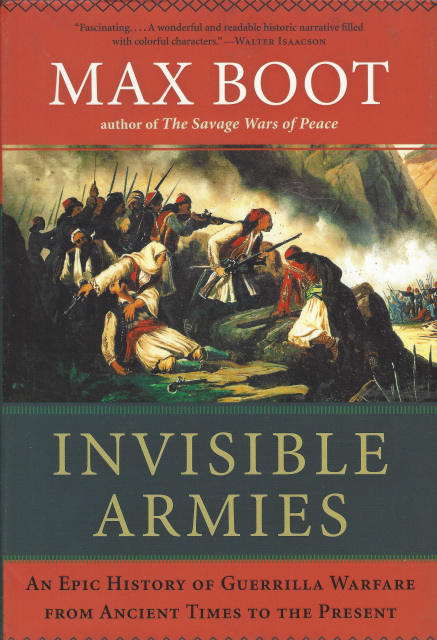 Invisible Armies: An Epic History of Guerrilla Warfare from Ancient Times to the Present by Max Boot

Invisible Armies: An Epic History of Guerrilla Warfare from Ancient Times to the Present by Max Boot

Narrating over thirty centuries of "unconventional" military conflicts, best-selling author and military historian Max Boot has created a work that traces guerrilla warfare and terrorism from antiquity to the present. Challenging the conventional wisdom that irregular warfare is the historical exception, Boot demonstrates that loosely organized partisan or guerrilla warfare is the norm, and that it is the clash of conventional, uniformed military forces that is the historical anomaly.

Beginning with the first insurgencies in the ancient world, great powers -- from Alexander the Great to Imperial Rome -- discovered that guerrilla armies were much harder to defeat than regular troops. This was a lesson taught by the nomadic raiders from the Persian highlands who brought down the first empire on record, in Mesopotamia, and by the relentless Hun raiders who helped bring down the Roman Empire.

In the modern era, Boot deftly shows that, despite the proliferation of powerful national armies, guerrilla and terrorist campaigns not only persisted but also reached new heights. A dramatic chapter on the militiamen dubbed the "American hornets" illustrates how the American revolutionaries were the quintessential "unseen enemy," striking and then disappearing into the general population. It was also the Americans who pioneered the use of propaganda to defeat a stronger enemy -- a strategy that future insurgents would emulate to fight the United States itself. Boot expands his analysis of liberal revolts to include the Haitian slave uprising led by the "Black Spartacus" Toussaint L'Ouverture, the Greek War of Independence, and the campaign for Italian unification spearheaded by the charismatic Giuseppe Garibaldi. Terrorist campaigns waged in areas like Bell Epoque Paris, tsarist Russia, and the Reconstruction South carry the narrative into the late nineteenth century.

Perhaps nowhere is the INVISIBLE ARMIES narrative more dramatic than in the calamitous twentieth century, when the power of public opinion and the transformation of guerrillas into celebrities and almost superhuman figures changed the calculus of warfare for both insurgents and their enemies. Men such as the archaeologist-turned-military adviser T.E. Lawrence; Vietnam's General Vo Nguyen Giap, a self-taught soldier who routed the French and then later the Americans from Indochina; and the "Quiet American," Edward Lansdale, form a diverse tapestry of characters, whose personalities and ability to harness public opinion came to define these conflicts.

Effortlessly weaving back and forth through history in a way that contextualizes the guerrilla and terrorist challenges of the twenty-first century, INVISIBLE ARMIES is a definitive work on unconventional warfare