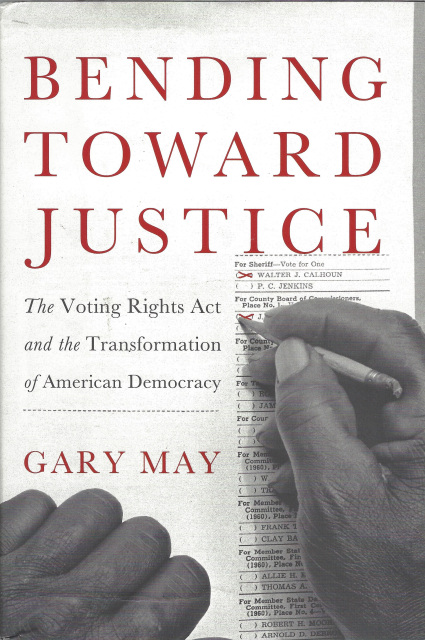 BENDING TOWARD JUSTICE: THE VOTING RIGHTS ACT AND THE TRANSFORMATION OF AMERICAN DEMOCRACY by Gary May

Bending Toward Justice: The Voting Rights Act and the Transformation of American Democracy by Gary May

When the Fifteenth Amendment of 1870 granted African Americans the right to vote, it seemed as if a new era of political equality was at hand. Before long, however, white segregationists across the South counterattacked, driving their black countrymen from the polls through a combination of sheer terror and insidious devices such as complex literacy tests and expensive poll taxes. Most African Americans would remain voiceless for nearly a century more, citizens in name only until the passage of the 1965 Voting Rights Act secured their access to the ballot.

In BENDING TOWARD JUSTICE< celebrated historian Gary May describes how black voters overcame centuries of bigotry to secure and preserve one of their most important rights as American citizens. The struggle that culminated in the passage of the Voting Rights Act was long and torturous, and only succeeded because of the courageous work of local freedom fighters and national civil rights leaders -- as well as, ironically, the opposition of Southern segregationists and law enforcement officials, who won public sympathy for the voting rights movement by brutally attacking peaceful demonstrators. But while the Voting Rights Act represented an unqualified victory over such forces of hate, May explains that its achievements remain in jeopardy. Many argue that the 2008 election of President Barack Obama rendered the Act obsolete, yet recent years have seen renewed efforts to curb voting rights and deny minorities the Act's hard-won protections. Legal challenges to key sections of the Act may soon lead the Supreme Court to declare those protections unconstitutional.

A vivid, fast-paced history of this landmark piece of civil rights legislation, BENDING TOWARD JUSTICE offers a dramatic, timely account of the struggle that finally won African Americans the ballot -- although, as May shows, the fight for voting rights is by no means over.