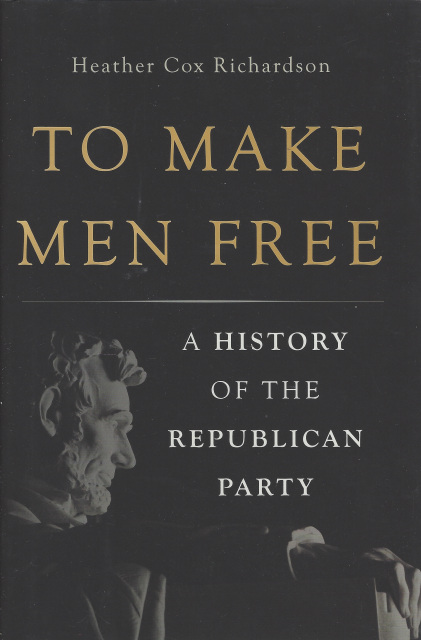 To Make Men Free: A History of the Republican Party by Heather Cox Richardson

To Make Men Free: A History of the Republican Party by Heather Cox Richardson

When Abraham Lincoln helped create the Republican Party on the eve of the Civil War, his goal was to promote economic opportunity for all Americans, not just wealthy slaveholders. Yet, despite this egalitarian dream, the Republican Party quickly became mired in an identity crisis. Would it advance democratic ideals? Or protect moneyed interests? In the century and a half since, Republicans have vacillated between these two poles, with momentous economic, political, and moral repercussions for the entire nation.

The Declaration of Independence declared that all men were created equal; the Constitution established that the nation was also based on the protection of property. These two principles, both central to America's identity, conflicted almost immediately when the Founding Fathers neglected to guard against the power of wealthy men to swing government policies in their favor. It was this oversight that the Republican Party's founders set out to rectify, only to be caught by it themselves.

In TO MAKE MEN FREE, historian Heather Cox Richardson traces how Lincoln's belief that government must promote widespread economic opportunity has been repeatedly undermined by the notion -- fomented amidst the racial and political conflict of the late nineteenth century and recycled ever since -- that government activism is socialism. Presidents Theodore Roosevelt and Dwight D. Eisenhower each revived Lincoln's vision, expanding government, reducing the concentration of wealth, and nurturing upward mobility. But each time, their opponents in the party linked those reforms to wealth redistribution, and after fanning Americans' worst racist and xenophobic fears, turned to promoting business interests at the expense of equality and meritocracy. The catastrophic financial collapses that followed in 1893, 1929, and 2008 forced the party back to its roots.

Expansive and authoritative, TO MAKE MEN FREE is a sweeping history of the party that has repeatedly been America's greatest political hope, while at the same time embodies the very tensions that have confounded our nation since its beginnings.