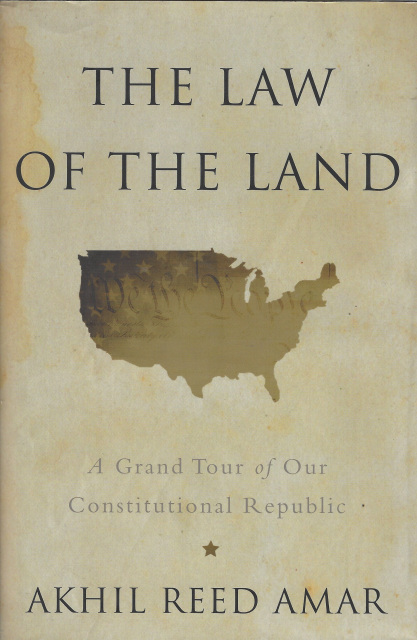 The Law of the Land: A Grand Tour of Our Constitutional Republic by Akhil Reed Amar

The Law of the Land: A Grand Tour of Our Constitutional Republic by Akhil Reed Amar

From Kennebunkport to Kauai, and from the Rio Grande to the Northern Rockies, ours is a vast republic. While we may be united under one constitution, separate and distinct states remain, each with it own constitution and culture. Geographic idiosyncrasies add more than just local character. Regional understandings of law and justice have shaped and reshaped our nation throughout history. America's Constitution, our founding and unifying document, looks slightly different in California than it does in Kansas.

In THE LAW OF THE LAND, renowned legal scholar Akhil Reed Amar illustrates how geography, federalism, and regionalism have influenced some of the biggest questions in American constitutional law. Writing about Illinois, "the land of Lincoln," Amar shows how our sixteenth president's ideas about secession were influenced by his Midwestern upbringing and outlook. All of today's Supreme Court justices, Amar notes, learned their law in the Northeast, and New Yorkers of various sorts dominate the judiciary as never before. The curious BUSH v. GORE decision, Amar insists, must be assessed with careful attention to Florida law and the Florida Constitution. The second amendment appears in a particularly interesting light, he argues, when viewed from the perspective of Rocky Mountain cowboys and cowgirls.

Propelled by Amar's distinctively smart, lucid, and engaging prose, these essays allow general readers to see the historical roots of, and contemporary solutions to, many important constitutional questions. THE LAW OF THE LAND illuminates our nation's history and politics, and shows how America's various local parts fit together to form a grand federal framework.