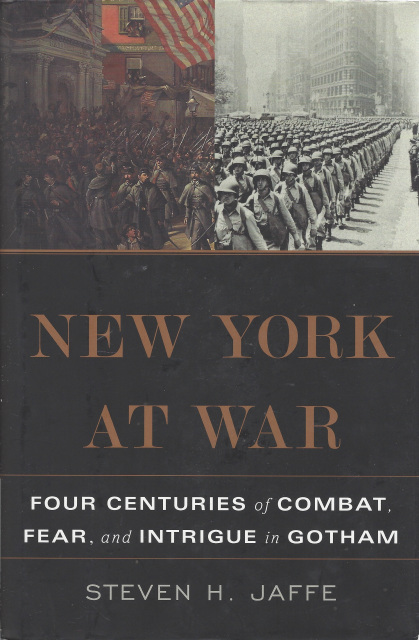 New York is arguably the most powerful city on earth, yet it is also extremely vulnerable. Ever since its inception, a host of dangers -- from Indian warriors and British redcoats to U-boats and terrorist bombers -- have menaced New York, fundamentally shaping its landscape and character. In New York at War, historian Steven H. Jaffe offers a riveting account of the attacks, battles, and acts of sabotage that, in threatening this defining American city, have helped to forge its very identity.

Soon after the first European settlers landed on Manhattan, they found themselves at war with Lenape Indians. As the Dutch community grew, so did is allure to hostile powers. When the British finally seized the port town in 1664, they ushered in new conflicts: a series of colonial wars and, eventually, a revolution that George Washington nearly lost on a Brooklyn battlefield. As New York became the iconic city of an increasingly powerful and assertive United States during the nineteenth and twentieth centuries, New Yorkers faced murderous draft riots, explosions and fires caused by enemy agents, and threatened attacks by sea and air. The September 11th hijackings are only the most recent in a long line of assaults on New York. But as Jaffe shows, fears of attack have also revealed the complex loyalties of Gotham's citizens, and at times turned New York into a city at war with itself.

Stretching from the colonial era to the War on Terror, New York at War is that rarest of books: a work of history at once local and international, timely and timeless. Bringing a unique lens to bear on the world's most celebrated and contested metropolis, Jaffe reveals how New York has changed over the centuries, while also showing how it has stubbornly endured.