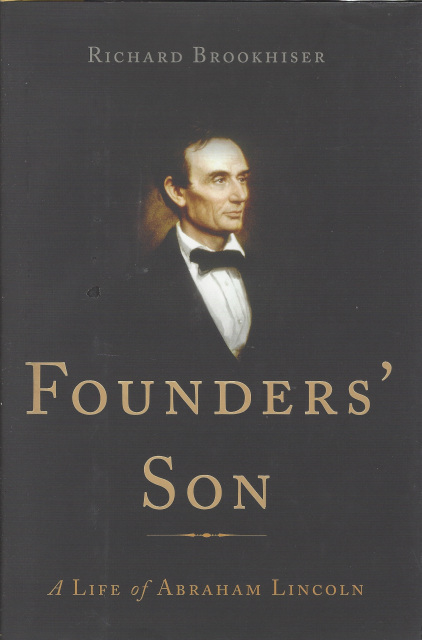 FOUNDERS' SON: A LIFE OF ABRAHAM LINCOLN by Richard Brookhiser

Founders' Son: A Life of Abraham Lincoln by Richard Brookhiser

Abraham Lincoln grew up in the long shadow of the Founding Fathers. Seeking an intellectual and emotional replacement for his own taciturn father, Lincoln turned to the great men of the founding -- Washington, Paine, Jefferson -- and their great documents -- the Declaration of Independence, the Constitution -- for knowledge, guidance, inspiration, and purpose. Out of the power vacuum created by their passing, Lincoln emerged from among his peers as the true inheritor of the Founders' mantle, bringing their vision to bear on the Civil War and the question of slavery.

In FOUNDERS' SON, celebrated historian Richard Brookhiser presents a compelling new biography of Abraham Lincoln that highlights his lifelong struggle to carry on the work of the Founding Fathers. Following Lincoln from his humble origins in Kentucky to his assassination in Washington, D.C., Brookhiser shows us every side of the man: laborer, lawyer, congressman, president, storyteller, wit, lover of ribald jokes, depressive, poet, friend, visionary. And he shows that despite his many roles and his varied life, Lincoln returned time and time again to the Founders. They were rhetorical and political touchstones, the basis of his interest in politics, and the lodestars guiding him as he navigated first Illinois politics and then the national scene.

But their legacy was not sufficient. As the Civil War lengthened and the casualties mounted, Lincoln wrestled with one more paternal figure -- God the Father -- to explain to himself, and to the nation, why ending slavery had come at such a terrible price.

Bridging the rich and tumultuous period from the founding of the United States to the Civil War, FOUNDERS' SON is unlike any Lincoln biography to date. Penetrating in its insight, elegant in its prose, and gripping in its vivid re-creation of Lincoln's roving mind at work, this book allows us to think anew about the first hundred years of American history, and shows how we, like Lincoln, can apply the legacy of the Founding Fathers to our times.