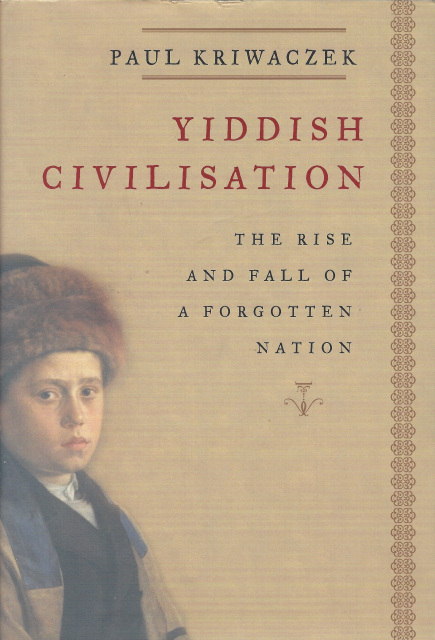 YIDDISH CIVILIZATION: THE RISE AND FALL OF A FORGOTTEN NATION by Paul Kriwaczek

Yiddish Civilisation: The Rise and Fall of a Forgotten Nation by Paul Kriwaczek

From the author of IN SEARCH OF ZARATHUSTRA, an illuminating chronicle of Yiddish civilization from its roots in the Diaspora to the present.

Paul Kriwaczek begins his search when Jewish culture first spreads to Europe during the Roman Empire, after the end of ancient Jerusalem and the destruction of its Temple at the hands of the Romans in the year A.D. 70. We see the burgeoning exile population disperse, moving outward and northward throughout the following centuries, making their mark in more far-flung cities under Roman rule. We see these communities settle and coalesce until in 1264 the Statute of Kalisz lays down the General Charter of Jewish Liberties, establishing the legal foundation of a separate, self-governing Yiddish world. Under these new guaranteed freedoms, the great treks begin, out of the Rhineland and Bavaria into western Russia and Ukraine. By its late-medieval heyday, this economically successful, intellectually adventurous, and largely self-ruling Yiddish society stretches from the Baltic to the Black Sea.

Providing a rich portrait of Yiddish civilization, Kriwaczek reflects upon the development of Yiddish language, occupations, social life, art, music, and literature, and introduces us to notable diplomats, artists, and thinkers: from the "Court Jews" of seventeenth-century Europe to Klikl bas Judah Leib, who wrote the first great Yiddish autobiography, to Moses Mendelssohn, the eighteenth-century philosopher and musician, to the great writers of the late nineteenth and twentieth centuries, Sholom Aleichem and I.B. Singer among them. He chronicles the slow decline of Yiddish culture in Europe and Russia, beginning in the seventeenth century with the Khmielnitsky massacres in Ukraine and culminating in the Holocaust, but looks further to fresh offshoots in the New World.

Combining intimate family anecdotes, travelogue, historical research, and interviews with scholars, Kriwaczek retraces the history of this nearly extinguished civilization to give us a celebration of what remains of Yiddish culture in our own time.