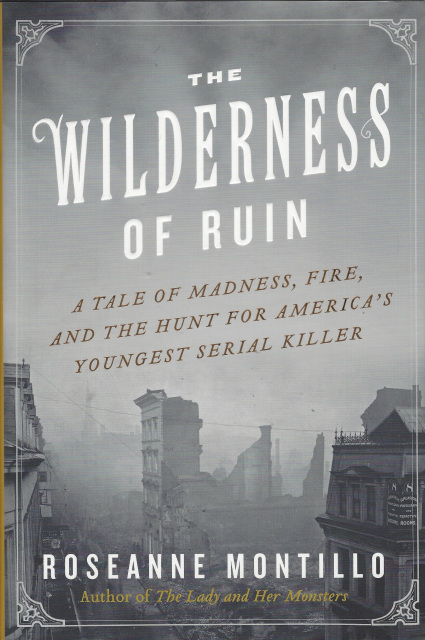 The Wilderness of Ruin: A Tale of Madness, Fire, and the Hunt for America's Youngest Serial Killer by Roseanne Montillo

The Wilderness of Ruin: A Tale of Madness, Fire, and the Hunt for America's Youngest Serial Killer by Roseanne Montillo

In 1871, young children were disappearing from Boston's working-class neighborhoods. The few who returned told desperate tales of being taken to the woods and tortured by a boy not much older than themselves. The police were skeptical -- these children were from poor families, so their testimony was easily discounted. And after the Great Boston Fire of 1862 reduced much of downtown to rubble, the city had more pressing concerns. Finally, when the police apprehended Jesse Pomeroy for the crimes, he, like any twelve-year-old, was sent off to reform school. Little thought was given to the danger he might pose to society, despite victims' chilling reports of this affectless Boy Torturer.

Sixteen months later, Jesse was released in the care of his mother, and within months a ten-year-old girl and a four-year-old boy went missing, their mutilated bodies later discovered by police. This set off a frantic hunt for Pomeroy, who was now proclaimed America's youngest serial killer. When he was captured and brought to trial, his case transfixed the nation, and two public figures -- Herman Melville and Oliver Wendell Holmes -- each probed the depths of Pomeroy's character in search for the meaning behind his madness.

Roseanne Montillo takes us inside those harroWing years, as a city reeling from great disaster reckoned with the moral quandries posed by Pomeroy's spree. What makes a person good or evil? How do we develop as moral beings? At what age do we hold someone responsible for violating society's moral code? And what does our fascination with such ghastly deeds reveal about us?

THE WILDERNESS OF RUIN is a dazzling combination of true-crime thrills, a fresh perspective on mental illness, and a fascinating look at American class turmoil that captures the spirit of a turbulent age.